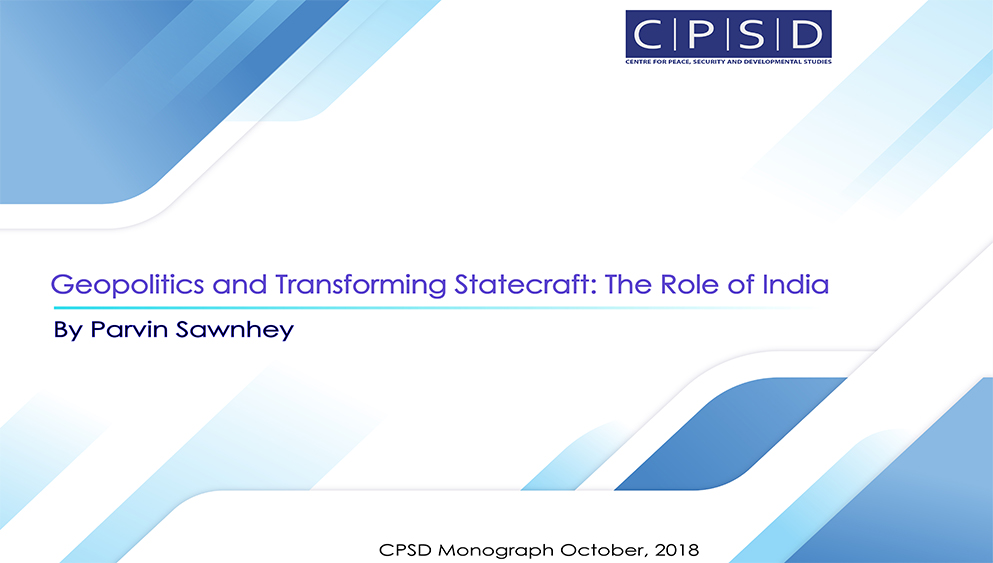 Geopolitics and Transforming Statecraft: The Role of India


India is currently debating whether it should ally itself with China, Russia or the USA as all three are vying for control of one of the fastest growing economies in the South Asia region. India therefore is seen as a strategic partner to counter the growing economic influence of China by the US which has doubled its efforts to safeguard the sea lanes of communication between the Western Pacific and the Indian Ocean.

In the modern world, to garner Indian support, the US has gone so far as to claim India as the “true strategic partner” and has also tried to sign an agreement which stipulates that US and Indian forces should train together to fight together. The unsaid urgency behind this agreement implies that without India, US’s Indo-Pacific Agreement will end up being merely talking points.

On the other hand, Russia, a long-term ally of India has been gaining ground in the Indo-Pacific region by setting itself up as the alternative supplier of energy and arms to smaller nations around India (such as Vietnam, Indonesia and the Philippines) who are already wary of getting sucked into US-China geopolitics. Russia is also India’s biggest arms supplier by giving it access to restricted arms technology and the only nation which has proved to be a strategic partner.

However, interestingly enough there is a third player – China – which has proved to be just as serious a concern as either of the other two. The 73-day standoff in 2017 in the Himalayas between Chinese and Indian soldiers confirmed China’s superiority in military terms. The Wuhan Agreement in April 2018 following this standoff, though completely informal, made clear some very crucial details. President Xi emphasised implicitly that China shares a common border with India and would be faster at coming to aid India (or fight it) when the moment arrives unlike the US.

By signing the Indo-Pacific Agreement with the USA, India stands to gain more than just prestige at having the Agreement renamed to specifically include and point at India (it was previously called the US Pacific Command). India believes that with an alliance with the US, growing military pressure from its neighbour, China, could be alleviated to some extent. Furthermore, India would also be able to join the exclusive and elite club of nations with access to nuclear technology and weapons while also joining the higher table at the UN Security Council (and thus getting veto powers in a lot of situations). Also partnership with the US could help India to combat China economically in the region. India should beware of signing agreements with either China or the US because both pose the nation-state very serious and real threats to its sovereignty and future security whereas Russia, as mentioned earlier, has been the only strategic and long-term ally in the region for India.

Regarding the US, India should have two reservations – the US has never given India high-level warfare technologies even though India has been actively seeking these technologies since December 1984. Furthermore, China’s warning to India is very true when looking at the 2017 China-India standoff where the US refused to come to India’s aid against China. Despite India’s beliefs that allying itself with the US will bring it a lot of non-monetary and security benefits, the very real situation is that India has not been helped by the US in recent wars, under the Trump administration. China, on the other hand, is set to become a regional economic superpower and India is loath to accept that given how it aims to defeat China in that sphere (with US help). Another reservation with China is that it could have trilateral economic and political meetings with Pakistan as the third member.

India has been reduced to becoming a balancing power among the three different economic and political superpowers. However, given the size of its populations, the demographics and the enormous potential these two have, India should not be content becoming just that. It should aspire to be a major power or geostrategic player who are by definition able to influence definitions well beyond their geographical borders. This is a third option that India could choose to explore. However, one major point in becoming this geostrategic player is if India makes peace with Pakistan and China – both neighbours of India with which it has disputed borders.