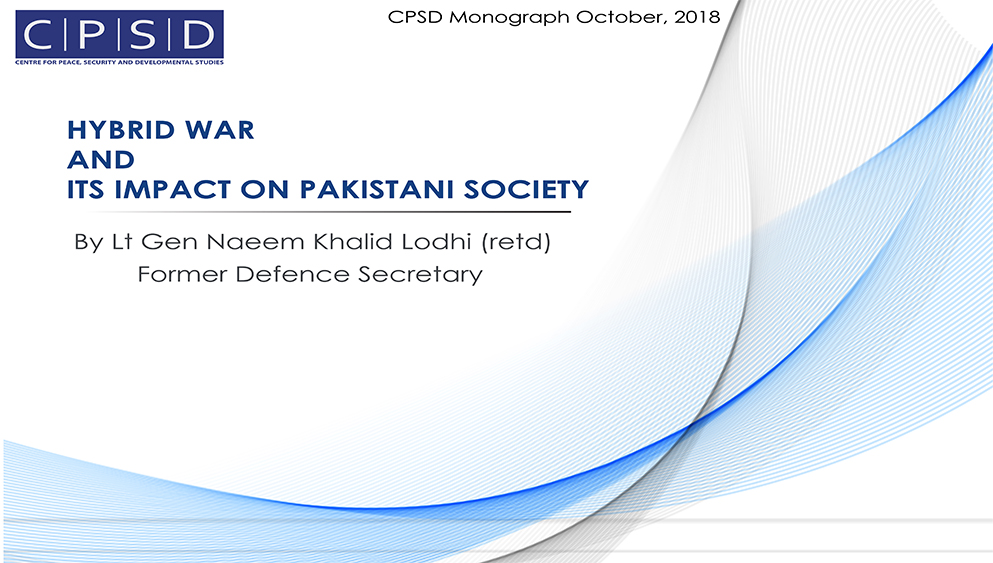 Hybrid War and its Impact on Pakistani Society


Though most dictionaries still define war as an “armed conflict,” the purpose of wars has mostly been subjection and subjugation of the opponent. Defeating the opposing forces mentally is and should always be the grand design of any war. Therefore it is always the opposing will that needs to be defeated, which may or may not be accompanied with a physical punishment.

In this paper, the actual location of will and where it resides in various political dispensations along with remarks on the best methods to attack it will be discussed. While explaining the modern methods of aggressions, the term hybrid war emerges. The methodologies adopted to fight against this type of war will also be discussed following an examination of the various connotations of this phrase

The nature of impact on society of this unique warfare would largely depend on the strength of the aggressor and the tactics he aims to employ achieve his goals. Firstly, undermining the economy would largely affect the poor and the middle class while attacks on the opposing moral stance and ethical moorings would generally affect the middle class only. If the social and class structure comes under stress, it will engulf the rich and middle class and may shatter their comfort. Similarly if the belief systems and the worldview of the rich and powerful come under attack, it may unhinge the foundation on which certain societies are constructed.

Hybrid attacks are meant to divide societies along sectarian and ethnic lines. To do this antagonists have created efficient and effective narratives to stir certain elements in the Punjab against the rest – the army against the civilians and vice versa would be a good example here. For a very long time their efforts remained ineffective, but with the rise of mainstream media it is argued that certain influential powers have employed techniques and resources to infiltrate certain segments of society. While only surface deep in the past these religious, sectarian, ethnic and inter-institutional fault lines have grown deep and wide and society at large is now fractured.

Unfortunately, efforts at projecting counter-narratives started quite late. Moreover, they are considerably weak, disorganized and poorly resourced hence even today the military and political leadership has been unable to effectively produce a united, cohesive response to this hybrid threat. It is believed therefore that a large section of society has fallen prey to these machinations and if we do not handle these effectively, Pakistan might find itself divided ripe with strife like many countries today in the modern world.

The main argument here is that all forms of hybrid war impact society. Every war, hybrid or otherwise, impacts society. In fact, it is the potential of the adverse impacts of wars that creates deterrence and abhorrence against wars. Wars are actually directed to break or dilute the will of the opposing entities. Most of the dictionaries still define war as an “armed conflict” as mentioned earlier. However, Sun Tzu in ancient times recognized the impact of the mere threat of defeat on the opposing minds, when he said that the “acme of strategy is to win a battle without fighting.”

Furthermore, we do talk a lot about the ‘nature and character of war’ and just as Aristotle cautioned us of ‘defining the terms’ before we embark on any discussion our war scholars agreed to keep the ‘nature’ of war fixed and the ‘character’ of war variable. But these are all semantics and terms coined for the ease of understanding. Similarly, we have even divided the character of war in a number of generations, according to the evolution of weapons resulting in transformations in tactics, operations and strategies. Starting from the first generation of warfare, we are now talking about the fifth generation of warfare which is hybrid warfare. It entails the employment of science and the art of warfare along with the application of modern resources available to mankind. This concept of war comprehensively embraces all known kinetic and non-kinetic means that could impinge on the opposing will.

Therefore, modern cash reserves and new technologies (LIC, employment of proxies, surgical strikes, drone attacks, psychological operations, media, mainstream and social media, operations, information operations, false flag operations, economic undermining, political and diplomatic, among others) with their global availability have enabled big and small powers to attack opposing minds, bodies, and their ‘will to resist’ in novel ways. Thus in the trilogy of strategy (ends, ways, and means) whereas the ‘end’ or objective still remains the same, defeating the opposing resolve, the ‘ways and means’ have undergone transformations. And unless the political and military leadership comprehends and embraces this new concept, it will not be able to cope with the adverse, and at times, devastating impact of hybrid wars.

To master the strategy of hybrid warfare, it is not enough to understand the ‘ways’ and ‘means’ available but also the location of the objective which ultimately is the ‘end’ we wish to attain. Since the final target, the ‘will’ and the ‘resistent mind-set’ of the opponent has already been determined the most appropriate ‘means’ or resources will then be employed singly, in tandem, or in a composite manner or in ‘ways’ that would directly or indirectly, but effectively attack the ‘will’ wherever it resides. By now it should have been quite clear that hybrid warfare straddles a larger presence in the cognitive space as compared to physical domains. It means that to prosecute a successful hybrid campaign a well-orchestrated onslaught would have to be unleashed against the minds and willpower of the adversaries, impacting their ‘worldviews’, ‘self-views’, relationships with others entities, attitudes, faith, bonding forces, cultural pride etc.

Hence, if the ‘will’ of a group of people, a nation or a country is to be the actual target, then it is of utmost importance to know as to where such an important target is located. In a large mass of people, an elaborate maze of systems and institutions how is it possible to pinpoint this resistive will? Does it lie in a concentrated form or is it distributed across a large space? Is it a physical or a meta-physical entity, related to bodies, hearts or minds? In my opinion this all-important ‘will’ of a people is the center of gravity of any nation that is dependent on the political, economic and social structure of that society.

In the case of Pakistani society, since its inception it was believed that our unity, the binding force lay in the faith, our religion and a culture under its influence. There were certain sectarian fault lines that were being exploited even before partition but the society still held strong for a long time after 1947 right up to the late 1960s. However, continuous neglect on our part and consistent efforts by our enemies to deepen and widen these fault lines started showing signs of success. Some old linguistic and ethnic disparities were also combined to create further schisms. Social injustice, neglected strata further exacerbated the complex situation where sensitivities became magnified dividing us horizontally and vertically quite comprehensively, hitting at the roots of our raison d’être. Thus the impact on our society is now profound and effective and we are struggling to repair such divisive trends.

It is important to understand that gauging and assessing the phenomenon is not enough; it has to be resisted effectively in a coherent manner. This is the new science and art of warfare and it is here to stay. It is argued that the country must devise a clear and concrete unifying policy to address polarization on several levels, which would pave the future for a stronger and more united Pakistan.