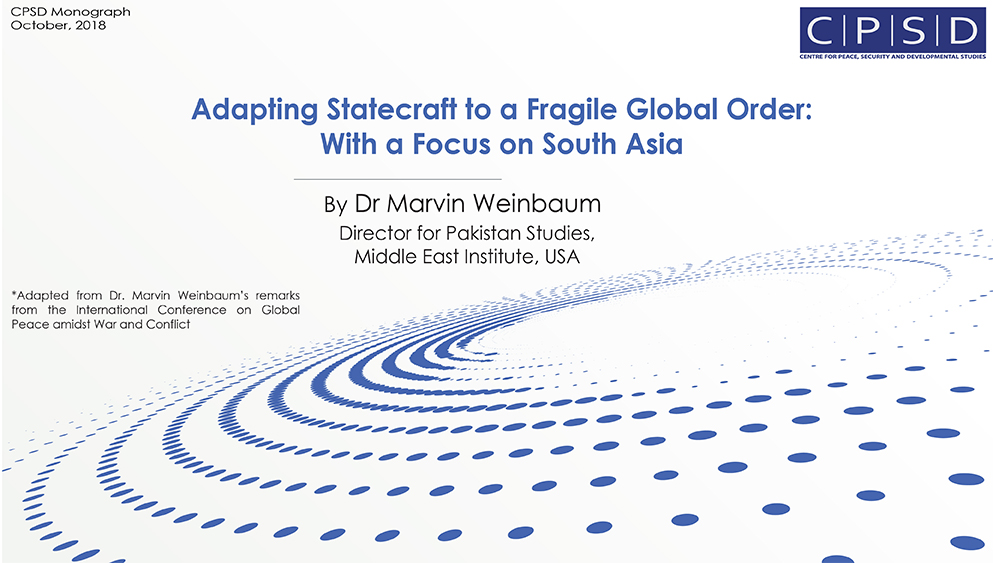 Adapting Statecraft to a Fragile Global Order: With a Focus on South Asia


In a world as increasingly moot, polarized and ever changing as ours, it is crucial to have stable, concrete and effective institutions in place. We currently face newer, more daunting and highly complex challenges. With the rise of sophisticated and highly organized terrorist organizations, a greater number of state actors are entering the fold of global affairs. With, ongoing civil wars and newer economic policies, it is pivotal for us to adopt solid statecraft policies to bring order to the fragile global order. Diplomacy continues to be the backbone of all regional cooperation, resolution of conflicts, the opening of new economic corridors, and fostering alliances. As opposed to the past when diplomacy concentrated only on the West, today’s global order begs for inclusivity and representation from all. In the past, we have seen those who truly suffer in volatile regions never make it to the negotiating table that decides their fate. Instead the discourse is dominated by those who exhibit influence, power and strength in numbers.

History remains testament to the fact that the domination of a discourse by those who are not major stakeholders in the issue, is not only an exhibition of imbalanced power structures but also manifests in poor decisions due to the absence of the very stakeholders. Hence, it is now more important than ever to open the discussion table to all, especially those who are the major stakeholders in the issue being discussed at hand.

Even though, the nation-state continues to be a major stakeholder, the unravelling of events in the late 20th Century continues to over-determine the role of the nation state. The state and its diplomacy have had to mold themselves to perfectly fit the model of rapidly increasing globalization, expanding economic interactions and interconnectivity marked by a growing interdependence of countries’ trade and financial systems and greater indivisibility of security. With the rise of innumerable terrorist factions, easy proliferation of weapons of mass destruction and nuclear arms race, coupled with the crippling state of health care systems and humanitarian crisis – collective security is the need of the hour.

Today’s state diplomacy is vastly different from what it used to be a few years ago. The reins of diplomacy, which were once just in the hands of the state are now slowly expanding beyond the state to include intergovernmental organizations, transnational corporations, nongovernmental organizations and various alliances and associations, who happen to be both, their harshest critics and their strongest allies.

When unpacking diplomacy, it is important to investigate the highly complex dichotomy between statecraft and the media. If employed responsibly, the media is generally perceived as a tool that could be used to inform and enlighten the masses, but can also be used as propagandistic rhetoric, manipulated by political power. The media entails immense communicative power and an incredible degree of influence which can shape thoughts and actions in a society. As important a tool social media is for the transmission of information, it can be easily used to misconstrue information. The modern and reformed methods of information transmission can result in devaluing conventional notions diplomacy by surpassing experienced and seasoned residential diplomats and career professionals. This probably contributes what we see as an increased tendency toward more transactional-ism and short term-ism among international actors.

Often, we associate a positive connotation with the term ‘diplomacy,’ but it is also important to view the term with as much diligence and punctiliousness. Coercive diplomacy is defined by three main elements a demand, an ultimatum to meet the demand and threat of consequences in case of non-compliance. But this can fail to consider that countries with now seemingly more foreign policy options or channels are freer to factor into their decisions non-rationalist factors such as national honor, respect and sovereignty. The conventional idea of diplomacy is one of an institution which is free of intervention, threat and use of power and ideally this is how it should be. The army and statecraft are often viewed as two swords that cannot be contained in one sheath, but desperate times call for responsible collaboration and negotiation between the two for the greater good. The year 2014 not only marked the end of the security transition process in Afghanistan, but also the rethinking of the foreign public diplomacy affairs in the country. Afghanistan offers a perfect case study in the way the Kabul government and its allies seek to employ force in conjunction with diplomacy to convince the Taliban to negotiate.

The advent of new gateways such as the China-Pakistan Economic Corridor (CPEC), coupled with older conflicts like the Kashmir issue, a volatile India-China border, the influx of Afghan Refugees in Pakistan and the Siachen dispute, all make South Asia a perfect case study to investigate the fluctuating trends of democracy and its use as the only instrument to bring order to the chaos that prevails in the Global South. Home to Afghanistan, Bangladesh, Bhutan, India, Maldives, Nepal, Pakistan, and Sri Lanka makes South Asia one of the most dynamic regions in the world with a population of 1.67 billion people and an economic growth of 7.1 percent over the last decade. Owing to recent shifts, historical political rifts, nuclear arms race, trust deficit, cross-border conflicts and security concerns contribute to a low-level equilibrium.

With intra-regional trade accounting for only percent of South Asia’s total trade, as opposed to ASEANS 25 percent, South Asia is considered to be one of the least integrated regions. Intra-regional investment in South Asia is lower than 1 percent of overall investment. A lengthy, expansive history of mutual distrust, unmet promises and negative stereotypes continue to linger in the background as any cooperation efforts are pursued. Moreover, limited access to accurate information about neighboring countries perpetuates damaging myths and reduced confidence. However, in the recent years active efforts have been made (though still infrequent) to bridge the barrier between the South Asian neighbors. To add, people-to-people contacts have also created a safe pace and potential opening to begin turning around long-standing negative attitudes. Even though South Asia has a long, tedious journey to make, the momentum of greater regional cooperation has been building in recent years. Increased economic exchange and regional interaction can increase trust and push regional economic integration even further.

In conclusion, South Asian regional politics demonstrates a very wide ethnic, linguistic, religious and regional diversity in the region. There is barely any ethnically homogeneous country, alongside socio economic balances and vast economic disparities between the high-income group and low-income group. Regional security is still distant, distrust runs rampant and the main incentive to strengthen security is mainly against each other. The lack of a mutual regional security has also greatly hindered the effectiveness of the South Asian Association for Regional Cooperation (SAARC). South Asia is a melting pot, with the issues of one country being intertwined with the other, either geographically, via porous borders, multiculturalism, or political history, and so the only way forward is for through mutualistic relationships that can be posited upon responsible diplomacy, representation and constructive discourse.