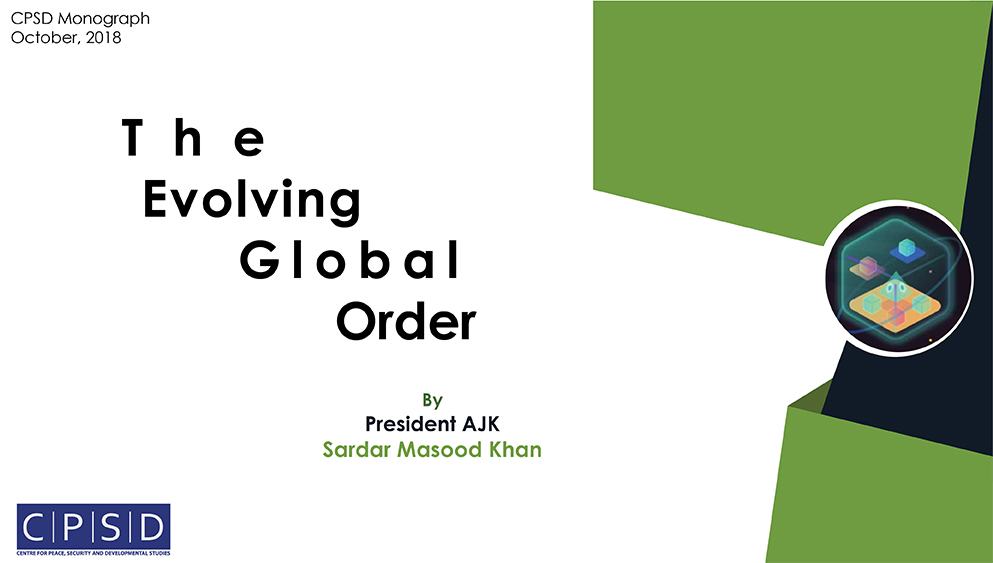 
The current world order is in a state of constant ‘flux.’ The United States continues to be an indispensable nation but alongside the evolving and maturing global order there are some notions and conventions that are also being challenged such as the ‘exceptionalism’ of the United States. Senator Daniel has said, “America is entitled to decide what role it wants to play in the world, but we are not entitled to pretend that the world is not changing.” There is also a new Cold War between the Russian Federation and the United States which continues to unfold every day in Syria, Ukraine, Georgia, and other parts of Eastern Europe. There is asymmetrical bipolarity between the two G2s (the two major powers who will co-manage the world order) as well as China’s concerns pertaining to cooperation with the United States.

Besides this, the turbulent situation in the Middle East, the polarization of Iraq and the civil war in Syria are all causes for concern. Furthermore, the opposition faced by the Belt and Road Initiative (BRI) from India, US, Japan and Australia who believe that the initiative behind the BRI is not all about leveraging the economic geography of contiguous regions and continents but is a clever geo-strategy to challenge American hegemony.

Moreover, the very complex and intertwined dichotomy between religion and politics needs to be explored too. There are varying perspectives of the Prophet Muhammad (PBUH) as a contemporary political figure in the context of the West followed by the increasing presence of political Islam and Islamophobia in the West. The authority of the Bretton Woods institution is also being challenged and how Westphalian sovereignty is under tremendous pressure due to the emergence of global citizenry. Artificial Intelligence is also radically transforming the global landscape.

There are numerous other challenges the world community must tackle – the war on terror, striving for nuclear stability and non-proliferation while reducing the expansive gap of economic disparity. The billionaire boom and the figures released in the recent Credit Suisse stating that 0.7 percent of the world’s population control a staggering figure of 128 trillion dollars is also cause for further concern. Shared values underpin the system put together after World War II and its very fundamentals – peace, security development and human rights – are being challenged.

There is a sense of urgency with a need for shared values at an international level, the need for the reconstruction of the world order, promoting cooperation instead of competition and the elimination of risk, of confrontation and miscalculation.

Focusing on South Asia specifically, there is a need for Pakistan to adopt a tripartite approach to strengthen its relations with China, US, and Russia. Furthermore, we need to revive and strengthen existing institutions which have helped the country swim out of crisis in the past, instead of dismantling them entirely. With regards to Indo-Pak relations full normalization is a distant reality until the outstanding Jammu and Kashmir conflict is resolved. Considering the case of Afghanistan, it must be recognized that the situation there is very vague and elusive and that we must continue our efforts for peace.

When talking about the mega project, CPEC, we must realize that the corridor is a complex port and Pakistan needs to use it as a launch pad to tap into newer avenues in Africa and South East Asia.

In conclusion, it is crucial for Pakistan to engage at all international forums, as ‘showing up is 80 percent of the game.’ Lastly, against the backdrop of a changing world order Pakistan should have a long-term vision and special attention should be paid to strengthening the economy instead of seeking leadership roles that bring divergence to Pakistan at an international or even regional level.