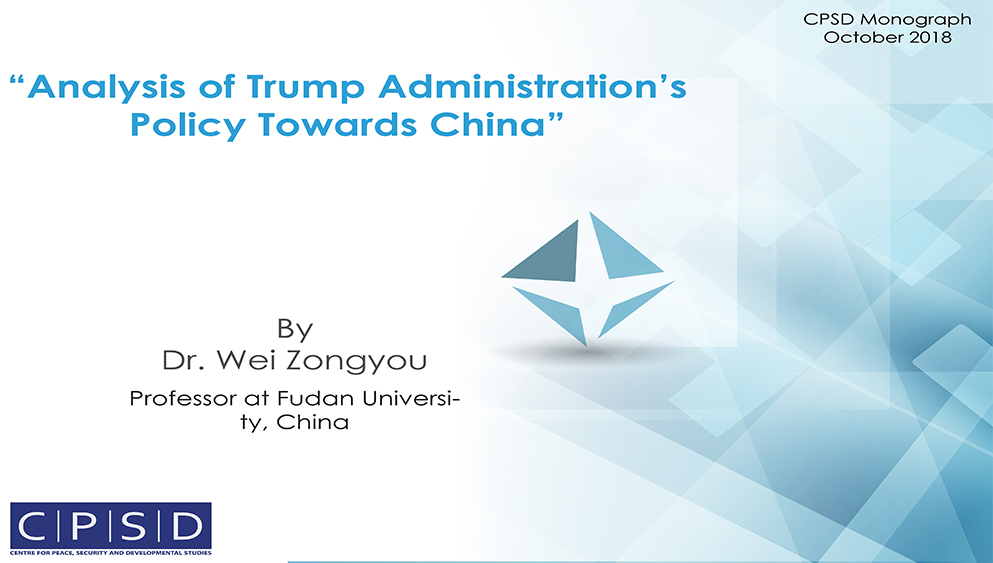 
In an era of growing uncertainty where China-US relations are growing increasingly complex, there is also a rise in populism, nationalism, Arab nationalism and in Great Power rivalry and technology. Moreover, in this age of globalisation, the rise of protectionism is aiding the growth of uncertainty.

The most important part of China-US relations includes growing competition which has fast become the most outstanding phenomena of this uncertain era. A lot of people have called it the Tariffs War or a trade war and the Trump administration, including Trump himself has announced that there might be additional billing against Chinese imports and exports. This will be in addition to the 25% tariff already in place. As a response, the Chinese government has also imposed the equivalent amount and said that if the Trump administration continues to impose unnecessary tariffs, the Chinese government will continue to retaliate. This kind of economic warfare is unprecedented – a trade war between the largest and second-largest economies in the world.

Another dimension of China-US relations is the economic competition in the Indo-Pacific and more specifically China’s role in trading with the initiation of the Belt and Road Initiative. The US has currently pulled forward in the emerging Indo-Pacific economic region with their Indo-Pacific Strategy, targeting particularly India. However, five years ago when the initiative was launched it was in response to the Obama administration’s pivot from and then re-balance to Asia. Outstanding Chinese scholars have suggested that China should not directly confront or compete with the US in order to avoid conflict. The East China Sea issue and the South China Sea issue were very hot problems in East Asia and China-US relations so how should China respond to this rising tension?

In another context, China has put forward the Belt and Road Initiative. China wants to invest in the Indo-Pacific region and also wants to facilitate the connectivity between China and the other countries in this broader region. However, the US and other countries (mainly US allies) have hinted at the idea that the Belt and Road Initiative is not just an economic issue or with only economic motives. According to these governments China has something other motive, a strategic motive with the BRI

In July 2018, business forums were organised by the US Commerce Chamber in Washington D.C. as a counter-balance and counter-measure against China’s BRI. Mike Pompeo stated that these forums and “this kind of initiative basically focuses on how to promote infrastructure building in the broader region but we use a different way, different from the Chinese way which is a state-driven model focusing on private enterprise.”

Nonetheless, there is some disagreement concerning this because infrastructure building takes a lot of time and needs a lot of monetary and non-monetary investment. The private sector does not have the will nor the capacity, monetarily and non-monetarily to invest in these money-consuming, time-consuming and risky projects which is why these areas, especially in developing nations must be adopted by the government. Furthermore, with a government there is also some sort of motivation to continue working at a project despite extensive delays.

Moreover, there is also a growing competition in the military dimension in the Indo-Pacific, especially with the rise of maritime disputes which have taken place in recent years in East Asia. The competition has also increased with China being better capable now of protecting its maritime interests although this has led to growing concerns in the US specifically regarding China’s military expenditure and its military supremacy in the Western Pacific. Besides this, China-US relations are strained also because of the clash of success models – the Chinese “path to success” vs. the US/Western model to becoming a rich democracy – despite Chinese scholars’ reiteration that China follows a “path to success” strategy rather than a model to follow in order to be successful. Nevertheless, there is still a very apparent competition of models

From the American perspective, there has been a serious debate since 2015 regarding US foreign policy concerning China especially when discussing engagement and policy. Was it a success or a failure? Now, there is an emerging consensus concerning US policy for China with a basic conclusion that the policy has failed because as China’s power grows, China does not become another democracy nor does it follow the model that the US has imagined. Instead China has become a strategic competitor, putting forward a lot of initiatives in the economic sphere as well as other areas.

From the Chinese perspective as China’s power grows so does its aspirations. It seems China wants to do more to boost opportunities for Chinese people, while also wanting to reform some international institutions to increase its voice and votes.