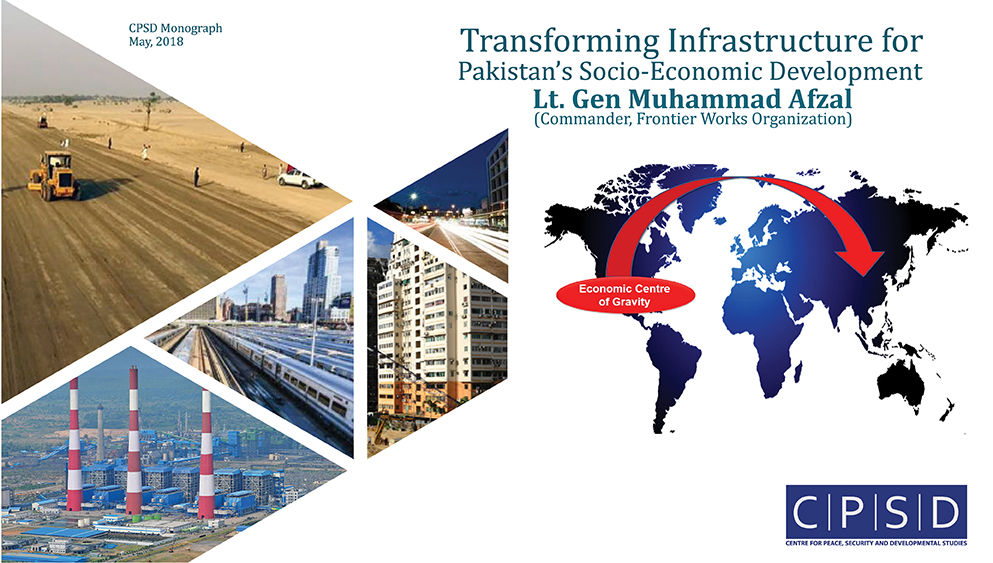 
In a post-2008 financial crisis world, there has been an accentuated fluctuation in shifting of instruments of power such as finance and international trade toward the Global South from the Western hemisphere. This radical shift is more prominent in the ambitiously planned Belt and Road initiative (BRI) by the Chinese government which is estimated to cover over 65% of the global population and 40% of the world’s GDP.

This makes this region of Asia the ‘economic center of gravity’ for the evolving multipolar world. In this global struggle for power, Pakistan, for its geostrategic location, can play a pivotal role.

Among the projects envisioned under the BRI, the China-Pakistan Economic Corridor (CPEC) is considered the flagship project. Under CPEC, China aims to connect to European and African markets through the port of Gwadar which is situated on the coast of Karachi. As some commentators put it, ‘A reverse of Marco Polo’ is in play.

Pakistan for its part wants to capitalize on this historic opportunity by integrating its economy with the rest of the world, thus serving as a hub of international trade. The opportunities of such integration are important for the stability and security of the country, the management of its human resource assets and accommodation of its vibrant and pragmatic entrepreneurial spirits.

However to sustain Pakistan socio-economic development there is a dire need for investment, institutional capacity, human resource and physical infrastructure. Our tax base remains limited which is a protracted problem of our governance structure. We possess large youth bulge as our 68% population is under age of 30 years. This youth bulge could be used for our advantage.

To further enhance our logistics infrastructure we need to develop four critical sectors:

Our national highway road network is 12,000 km long. The following 4 problems can be identified with road transportation infrastructure: bottlenecks, non-motorized traffic, non-regulated commercial activities and lack of trucking and industry regulations. The inefficiency in the transport sector is costing 4-5% of GDP. In terms of ports infrastructure, around 95% of imports and exports are handled by Karachi Port and Bin Qasim Port. Karachi port handles 75% total volume of trade. Gwadar Port lacks connectivity with shortage of oil and gas pipelines and railways.

Concurrently, the railway network of Pakistan is spread around 7, 791 km. However, railway also confronts multifaceted challenges to its infrastructure including high cost of transportation, damaging and over-burdening of road systems, congestion and pollution.

Having stated aforementioned points, the challenges that we face today are numerous, such as inadequacy in our legal framework, which in turns adversely affect our country. There is non-availability of transport/transit trade framework for western route. In view of our Sust Dry Port and Gwadar, they are limited in capacity and inadequate in terms of infrastructure.

Logistic infrastructure along western route is also paramount for viability of trade corridor. However, compatible logistic services/parks remains most wanting along KKH and western route. The challenges toward physical infrastructure comprises of power and energy sector, petroleum sector and water sector. In the energy and power sector domain, power shortages severely impact industrial sector, agriculture output and services sector. Over 3% of the GDP having a downward impact because of power shortages to these sectors.

Furthermore, our water storage capacity is at 18 MAF with 1070 Cubic Meter Per Capita. The annual average flow is over 140 MAF. In terms of petroleum sector, our crude oil production is 95,000 BOPD which caters for 17% of total demand. Much of the bulk consumption is situated in the north while ports are located in the south of Pakistan. The oil is transported throughout the country through road networking system, which contributes to frequent oil shortages.

There remains a dire need for structural and institutional reforms in the country for a sustained socio-economic growth. Our regional connectivity depends on linking our major trade routes such as highways, railways and pipelines. It also requires the development of state-of-art efficient logistic chain, developing of special economic zones (SEZs) and industrial zones. We need to increase our oil storage which is connected through pipelines, build water and hydro power development projects including mega dams, exploration and development of mineral resources to fund economic programs and development of skilled human resources.

Pakistan can implement the concept of “One Window Operation” or “One Stop Shop” to develop a cordial interface between investors and Pakistani authorities. Government should facilitate pre-investment and post-investment services and create an enabling environment for business thriving. Government should also provide a level playing field for investors and seek BOT regime/PPP mode to fund development initiatives. Effective government control for regulation and tapping real estate potential is imperative for the success of investment.

Consequently, government should develop logistic infrastructure along the western route alongside actualization of CPEC and embark upon capacity enhancement of Sust Dry Port and Gwadar Port.

It must seek to align and operationalize existing agreements (QTTA/TIR). It also need to institute legal transit trade framework.

The national strategic development plan comprises of the following:

In Petroleum sector, an oil village must be develop to sustain and augment our current capacity of 60,000 MT. It should be done on Build, Own and Operate (BOO) basis. Oil village then subsequently connect with white oil pipeline network in 2nd phase. In Water and Energy security, HPPS and medium sized dams are being developed namely Kurram Tangi Dam (84 MW), Naran (188 MW) and Jagran HPP (48 MW).

The Frontier Works Organization (FWO) raised a special organization for Mine exploration and development (MEDO). Moreover, the National University of Technology and Skills Development (NUTECH) is also established.

Pakistan has great economic potential which is yet to be explored, however there remain critical challenges such as:

1. We must not rely upon foreign loans. Instead we must seek to fund our development programs through local financial institutions, significantly reducing our foreign dependency.

2. By investment/BOT mode, the bureaucratic and procedural lethargy in approval of mega projects of national significance.

3. Mutual acrimony among government institutions are the cause of significant delays in approval of projects. The Gwadar Declination Plant Project is a case study for it.

4. Lack of organized planning and incompatibility of cash flows contribute adversely to the finalization of projects as PSDP funded projects inordinately get delayed and ends up in high cost.

Only with a sustained and organized approach can the Pakistani government hope to take advantage of the opportunities which lies ahead of us. But without significant domestic reforms we won’t be able to reap the benefits of CPEC and other regional economic integration projects. We must forge a collective national will and resolve to march forward with the time of globalization and multilateralism.