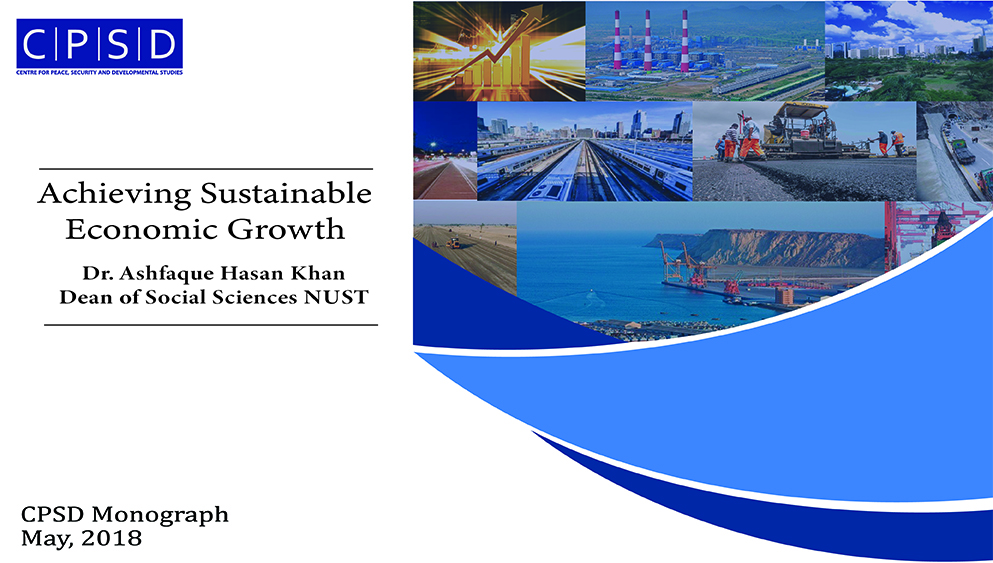 
Since its inception in 1947, Pakistan has seen visible fluctuations in its economy. It has seen highs such as in the 60’s decade and lows especially during the war on terror. There has been visible economic growth but the fluctuating nature of Pakistan’s economy affects the overall growth and therefore, a need for sustainable economic growth must be kept on top of the priority list. There are several ways to achieve sustainable economic growth in the long term and Pakistan should implement the recommended policies for improved macroeconomic projections.

Economic growth should always be looked at in context of historical events, it is because economy is one of the first facets of the country that is affected by ongoing events.

The gradual deterioration of the economic condition is visible from this table as not only does the external debt show an exponential increment, the trade deficit also has ventured into the negative territory.

Pakistan since 1988 has engaged nine separate times with IMF, which resulted into decline in financial sovereignty, because whenever Pakistan approached IMF a strict or stringent stabilization policy was imposed on Pakistan.

Higher interest rate increases the cost of financing fiscal deficit which in turn increases interest payments resulting into increase in current expenditure, and it ultimately increases overall expenditure, unless development expenditure is cut down, this further puts pressure on budget deficit. Strict fiscal policy reduces public investment (another component of aggregate demand). Strict monetary policy increases overall expenditure via the rise in interest payment. Strict fiscal policy reduces public spending, particularly development spending. While overall expenditure may not increase, the quality of spending does suffer. Under Stabilization Policy neither government spends adequately nor does private sector invest more which in turn suffocates the economy. It is for this reason that stabilization policy is also known as anti-growth policy.

There are two main sources of economic instability:

Exogenous Shocks: Examples are terms of trade shocks, natural disasters, capital flight etc. Many developing countries have narrow export base. Shocks to the world price fluctuations of their commodities can have strong impact on country's export earnings. If the country’s export base is diverse, then large or long-lasting shocks will be required to destabilize such an economy.

Self-Induced Shocks: This depicts poor macroeconomic management. For example, excessively loose fiscal policy can increase aggregate demand and it place pressure on country’s balance of payments as well as on inflation. Pressure on exchange rate leads to rising public debt, increasing interest payments which leads to erosion of fiscal space and therefore a decline in investment on education, health and infrastructure can be observed.

Pakistan faced external as well as self-induced shocks in 2008 and 2013, respectively and continued to pursue, by and large, the IMF stabilization policy of the 1980s vintage since 2008 and until today. Such a prolonged period (ten years) of stabilization or austerity or anti-growth policy has suffocated the economy of Pakistan and severely constrained the country’s short-to-medium term growth potential with a rise in socio-economic challenges for the country. Such a prolonged use of austerity or anti-growth policy has critically damaged the country’s medium to-long term growth prospects as well. In the absence of manipulation, a growth rate in the range of 3.0-4.0 percent has become a ‘new normal’ for Pakistan. The economy may not grow in the range of 7-8 percent unless we change the current policy parameters.

A very important dimension of achieving sustainable economic growth deals with human capital. Pakistan’s burgeoning population should be used as a strength instead of a weakness. Investment in health and education will lead to an improved quality of human capital. Education and Health are critical inputs to overall human development. Health is central to well-being and education is essential for a satisfying and rewarding life. Education plays a key role in the ability of a developing country to absorb modern technology and to develop the capacity for self-sustaining growth and development.

Health on the other hand, is a prerequisite for increase in productivity. Both health and education are interconnected. Good health may improve the return to investment in education. Empirical evidence suggests that there exists a bidirectional relationship between income and human capital indices: with higher income, people and governments can afford to spend more on education and health, thus improving human capital, which in turn, leads to higher productivity and more incomes.

The importance of human capital in making a country more prosperous on a sustained basis cannot be overemphasized. No nation can progress in a competitive world without investing in its people to build human capital base. Given the current demographic structure of Pakistan where 50 percent of its population is below the age of 20 years, it has a clear choice to make: either grab the opportunity to make this young population productive citizens by investing in them; or be ready to witness eventual implosion.

Building human capital alone is not enough. We need to create rewarding employment opportunities for which, we need to change our macroeconomic policy parameters from reducing budget deficit to promoting job-rich inclusive growth. In a democratic society, growth must be democratized as well, that is, the majority of the population should benefit from growth.