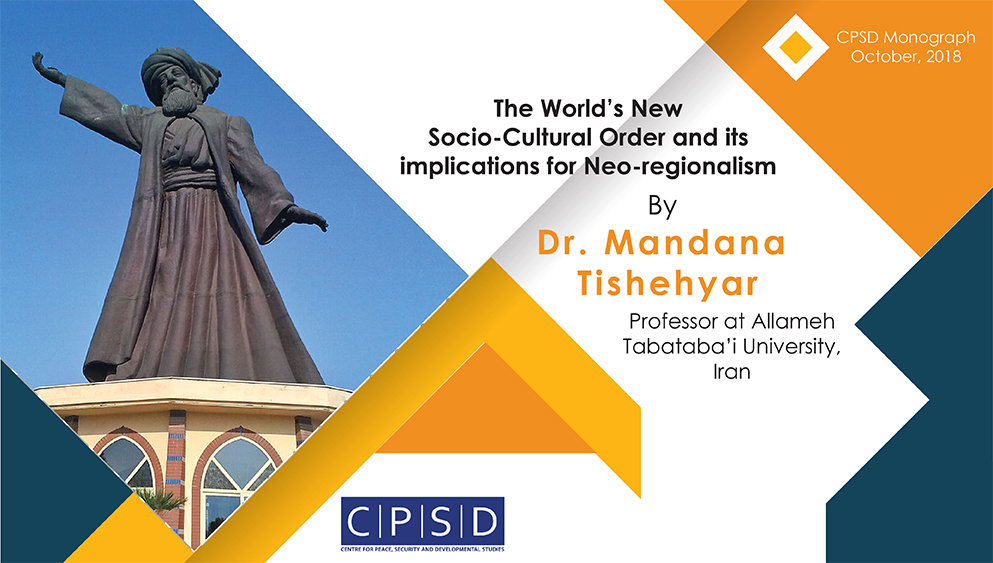 
By Dr. Mandana Tishehyar It is a fact that in the past decades, political units, while accepting globalization have also tried to redefine their interests and identities within regional frameworks. There are four theories of regionalism which had a place amongst theories of International Relations in the 1960’s. These brushed up the steps in redefining basic concepts from the 1990’s when following the collapse of the Soviet Union, new approaches emerged in the regionalism framework.

According to classical theories of regionalism, countries cannot be in different physical (geographical) places whenever they choose because they are dependent on the geographical areas where they have come into existence. This is why they generally do not have the option of joining regional arrangements if they are not geographically located in the same region.

In today’s world, regionalism has provided an appropriate ground for forming various layers of regional cooperation based on two elements: “thematic openness” and “geographical flexibility.” Based on this new approach, it is possible to define a new sphere of cooperation among countries.

The definition of the concept of “region” has become more flexible and various forms of regional organizations and institutes can be created based on the interests of the countries that are brought together. In fact in the modern world order, countries have become globally regional rather than moving towards a unipolar or multi-polar order and although powerful political units have their own rules and particular functions, regional actors such as Pakistan, Iran, Turkey and others have also found the stage to display their economic, social, and political prowess.

This new kind of regionalism has constructed identities and norms within the framework of institution building and might also become a new political discourse in the international arena. In this discourse, multiple identities have been sometimes been defined in a single geographical area and have overlapped each other. Thus, several layers of regionalism can be formed simultaneously with different functions and each country defines its regional relations according to its needs and interests in one or more areas. Consequently, a region is what we perceive, not necessarily what is defined on the map. Therefore despite geography being an important factor, it has become a more flexible element and can be portrayed based on the needs and identities of each country each time

One of the functions of neo-regional cooperation is providing culture-based security. This pragmatic approach to cooperation for achieving qualitative security and providing interest for regional actors has been our first step towards regionalism. From this perspective, we can say that cultural values are the basis of identities and common interest can increase cooperation between the states – they define common cultural values and can decrease the animosities and ensure stability. As a result, security based on a shared or common understanding of culture is the most important product of neo-regionalism.

As a result, unpleasant historical memories and a desire for domination results in separated identities and the neglecting of common cultural norms and values between countries belonging to the same historical civilization. The different perceptions of self and others cause extending political borders while other aspects of relations and their linguistic, religious, racial, ethnic and cultural diversities will be redefined in this integrated framework. However, history bears witness to the fact that when peace and prosperity become important countries seeks to identify and recognize the benefits of each other and competition occurs in the framework of co-existence rather than war.

In fact, cultural integration between units in the region could expand economic cooperation and decrease political tension. The European Union and the association of South East Asian Nations are two good examples of defining common identities and values and even ideologies in a way to increase collective security.

Today in the three important regions of Central, South, and West Asia the political boundaries and emphasis on national elements such as language, religion, and ethnicity have caused the people of these countries to identify themselves with their national identity rather than with a broader regional identity. However, their common culture as an important identity element ties these lands to each other.

Besides this since security in the modern world is not limited to geographical boundaries or to a specific territory, in order to achieve economic dynamism and political and social stability, the countries located in this region also have no choice but to work together. These collaborations in the current era can be accomplished with two goals: reduce tensions amongst the states of said geographical area and then establish new conventions to confront ethical and religious extremism.

Cultural similarities and the existence of common cultural elements among people of this geographical area have been contributing towards shaping a common identity. Many countries in these regions carry on the legacy of their cultures based on a common tradition and history. Today the revival of these common identities not only helps the cultural convergence of people residing in these regions but can also be the reason for culture-based security. For instance, mystical teachings are one of the most common cultural elements in these three regions and have played a significant role in connecting the people. These principles were unique, and taught in moral and social schools whose functions were not limited to a particular task.

In fact these schools are the reason for the civilization’s special cultural achievements. For example, the school in Khorasan is one of the largest mystical schools of this geographical area and taught major intellectuals and thinkers from Central, South, and West Asia. This school accepts not just the principles of Islamic theology but has also influenced pre-Islamic religions.

One of the advantages of this school of thought is its proximity with chivalry (ayyari) resulting in the presence of Sufism and mysticism in social, political, and economic spheres. The school of Khorasan with its different branches – Chishtia, Qaderiaye, Nashpatiah and Azerbaijani schools – may be mostly recognized with generosity and as I mentioned ayyari.

Reflecting on their social behavior through which serving others and being kind to people was institutionalized and spread into other areas while also forming a culture of being responsible and kind to newcomers we know now that it is from these schools that the cultural traditions of these societies have originated and in fact were based on the perspectives of the individuals who were fighting against oppression.

Unlike other schools of Sufism which emphasize isolationism and urge followers to stay away from society and live in monasteries – the Khorasan schools believe that their students should experience life and live within society. Therefore, these schools broadly affected the social life of the people, hence, scholars, writers and mystics played a special role in shaping the lifestyles of this area and in building a good pattern of governance.