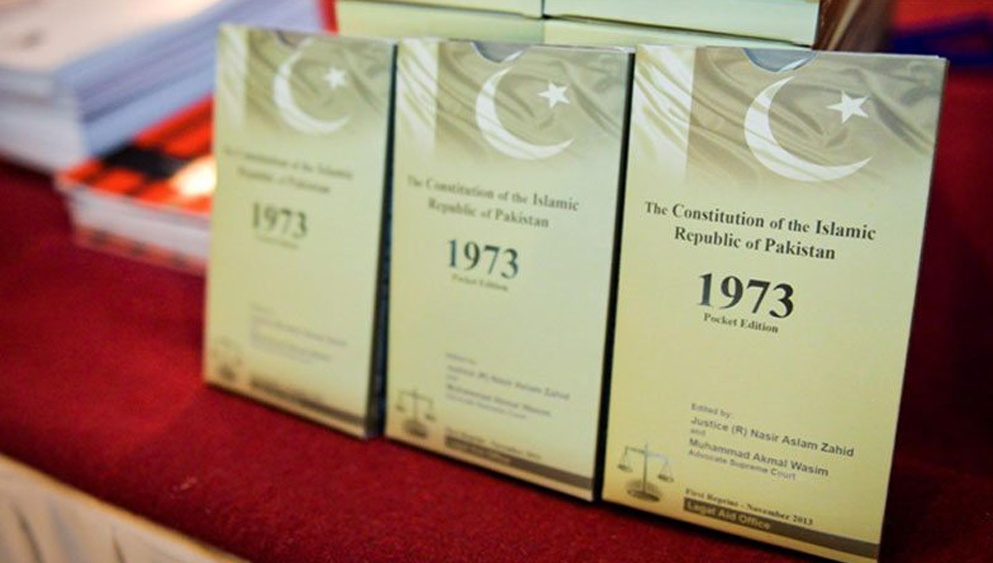 The Question of Constitutional Sanctity

Over the years, every new government has amended the constitution according to its will and personal gains. Hence, it comes as no surprise that the document has not received as much respect from public as it deserves. Amendments are considered as a progressive sign for a constitution, but in Pakistan these amendments have not been much effective as they tend to change the very core of the constitution. Take the 18th amendment for example. 290 out of 342 members of National Assembly voted in favor of this amendment and it had support of almost all political parties. The question is, has this amendment make the Constitution of Pakistan more respectable? Unfortunately, sanctity of a constitution cannot be determined by the number of votes it receives in parliament but by actual public support that ensures that society would not accept any change in the core values of the document.

The first constitution of Pakistan was enacted in 1956 but was suspended through a military takeover, just in two years. Subsequent constitution of 1963 introduced by Gen Ayub Khan also ended in the same fashion. The 1973 constitution, i.e. the present constitution of Pakistan, was adopted by an elected assembly. Yet it remained vulnerable to various undemocratic powers altering the very mode of governance mentioned in the original document. Public never responded much to any of these. The lack of awareness on the purpose and role of constitution is a major factor behind this numb behavior of public.

FACTORS BEHIND THE LACK OF CONSTITUTIONAL SANCTITY AND PUBLIC AWARENESS

Absence of legal awareness is linked to the poor socio-economic condition of the people of Pakistan. When getting basic needs of life become a challenge, people cannot care much for the constitutional matters in their life. In a country where about 6 percent of total population is unemployed and 42 percent is illiterate, there is no chance that a common man would protest for a change in law. Because neither he understands the importance of constitution, nor he can afford to be deprived of his bread and butter.

Political leadership is equally responsible for ruining the sanctity of our constitution. Pakistan People’s Party (PPP) brought 18th amendment for “strengthening the democracy”, but now they are exploiting the amendment for keeping their hold in Sindh and to remain relevant in the Pakistani politics. Military rulers have particularly damaged constitutional sanctity. After Ayub Khan, the military dictators decided not to abolish the constitution but to amend it in accordance to their personal interests. Hence, a normal democratic practice of amendment became a source of political instability in Pakistan. Gen. Zia-ul-Haq is the torchbearer of this unfair use of amendments. Yet some of the amendments enacted during the dictatorship of Zia-ul-Haq are still part of the constitution, even after the eighteenth amendment that was aimed to abolish all constitutional amendments made during dictatorial periods.

Every road has a turning point. This bumpy ride of our constitutional evolution must have one as well. Public awareness is the key to constitutional sanctity. Education is a prerequisite for such a change, so the government will have to ensure basic education for all. At the higher education level, the government should introduce courses or program to discuss the important elements of the constitution of Pakistan. However, to make the legislation a matter of public concern, there must be devolution of powers in the form of local government. Local government system would make public feel as an indispensable part of the process of policymaking and, eventually, would make them care for the rule of law and constitutional sanctity.