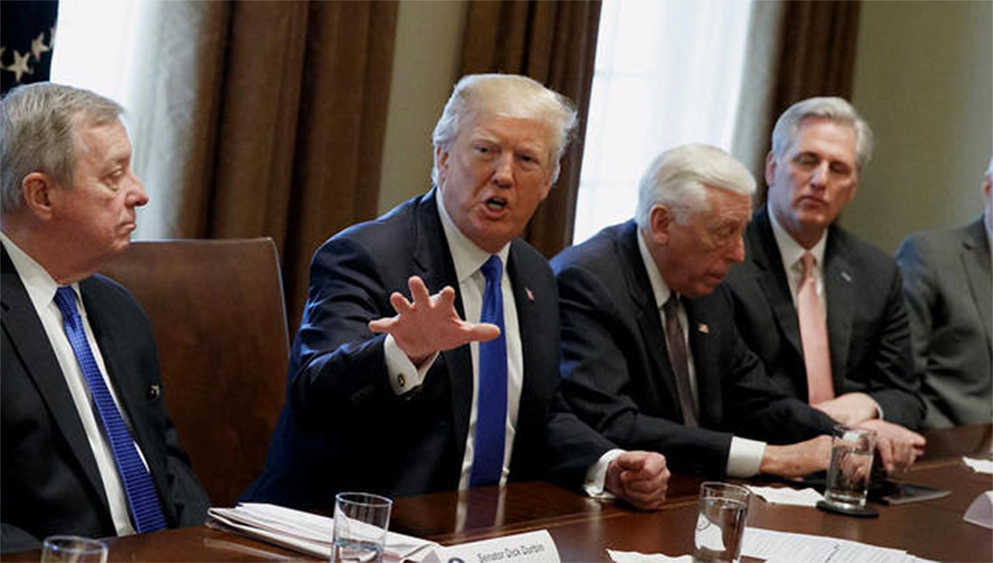 From an Endless Blame Game to the Reaction of Do No More!

A decade long journey of America blame game towards Pakistan has reached to its height after the announcement of Trump administration new strategy regarding Afghanistan and South Asia, issued in August this year, labeling Pakistan a state sponsor of terrorism. President Trump remarked: We have been paying Pakistan billions and billions of dollars at the same time they are housing the very terrorists that we are fighting. But that will have to change, and that will change immediately.

Despite the accusations against Pakistan, Islamabad response was very mature. As the country realizes that the casual disrespect of all of their intensive counter-terrorism and counter-insurgency efforts by Trump administration is not in interest of either of the state. As a result of that, Pakistan continued its efforts to curb off terrorism and militant organizations on its soil and perused its National Action Plan. However, Pakistan Chief of Army Staff Qamar Javed Bajwa did stress that Pakistan is not looking for any material or financial assistance from USA, but trust, understanding and acknowledgement of its contributions.

Pakistan stance on the war-torn Afghanistan is far more than crystal clear, as it has always yearned for collaboration and synergy of effort to put Taliban and the Afghan Government to the negotiation table.

Pakistan Foreign Minister, Khawaja Asif fairly maintained his stance in a conference organized by USIP, that being a porous border state of Afghanistan, Pakistan is the biggest beneficiary of Afghan peace. He also made point by saying that the United States is solely focusing on its accusation of having safe heavens of Haqqani and other terrorist organizations and blaming Pakistan for what they have not achieved in Afghanistan. He said: â€œthere are many more dimensions to what is going on in Afghanistan; the corrupt government in Kabul, Afghan army selling weapons to Taliban in open market, loss of nearly 40% of Afghan territory to Taliban, hold of Daesh in three provinces, rise in narcotic trade, and Pakistan does not share the responsibility for all of these crimes. Pakistan sincere efforts for Afghan peace can be seen as the country has again proposed to reinitiate Quadrilateral Coordination Group (QCG) talks to achieve a better solution to the Afghan problem.

From Pak-Afghan border fencing to the military operations conducted by the Pakistani armed forces against the transnational militant groups has not only restored peace in Pakistan but it also certifies the capability and seriousness of Pakistan to fight against terrorism.

The recent operation to release the Canadian and American hostages through an intelligence-based operation in co-ordination with US agencies gives Washington a strong message that the country is serious in war against terrorism and is willing to cooperate with United States but on the terms of mutual trust and respect.

On the other hand, President Trump explicit call for India to become more involved in Afghanistan verified that America long history of balancing the power between two South Asian opponents has rolled in India favor. Islamabad firmly believes that India increased involvement in Afghanistan is threatening for Pakistan-Afghanistan relations as various evidences shows that India is using Afghan soil to destabilize Pakistan and its mega economic corridor project that aims to facilitate trade and cooperation between Pakistan-China as well as the rest of European and Central Asian states. However, Pakistan indigenous nuclear arms capability and conventional weapon system enables the country to deter its archrival India in the region.

Less dependency on US military technology and development of a sovereign defense capability is also helping Pakistan to maintain balance of power in the region. As the Prime Minister of Pakistan Shahid Khakan Abbasi stated recently that the days of Pakistan depending on United States to meet its military and other requirements are over. We have diversified, we have Chinese and European systems. Recently, for the first time we inducted Russian attack helicopters. This directs that Pakistan is considering other options to further upgrade its weapon technology.

Since the past few years, US tilt towards India solely, rather than treating both South Asian nuclear arms states equally already flagged the US intentions and their policy shift in the region, which neither comfort nor support the National interest of Pakistan.

Despite that Pakistan is maintaining its rational stance on the Policy of engagement and diplomatic talks with United States and the International community for peace and stability in the region in a longer-run.