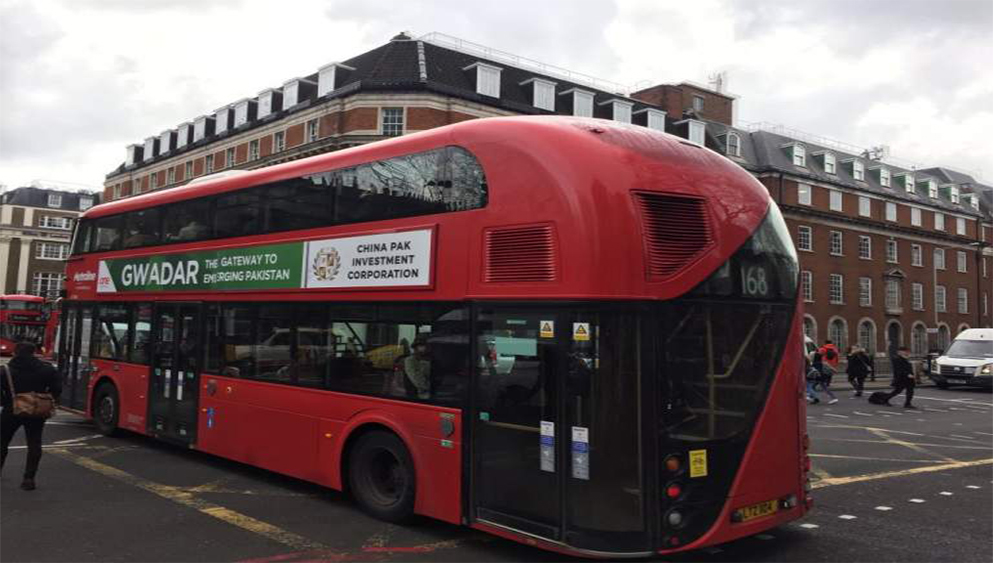 A Chinese investment group, China Pak Investments Corporation (CPIC), has launched its advertisement campaign to promote Gwadar in London. 100 double deck buses have been launched in London carrying beautifully designed banners which read Gwadar: the Gateway to Emerging Pakistan . They will run on 17 routes within London. It is considered to be the most expensive, diverse and creative campaign launched to promote Gwadar outside Pakistan.

Gwadar port is a deep sea port situated on the Arabian Sea at Gwadar in Balochistan. The port lies at the heart of the China-Pakistan Economic Corridor (CPEC) which is the flagship project of the Belt and Road Initiative (BRI). It will connect the BRI with the Maritime Silk Road. China is developing a port and a city along Gwadar with the aim of linking Northern Pakistan to Western China. The port will also be the site of a floating liquefied natural gas facility that will be built as part of the Iran “Pakistan gas pipeline project.

CPIC is a leading Chinese investment company; they acquired GDA approved International Port City, was renamed to China Pak Hills. Together, they are developing Pakistan first Chinese built Master-Community. The master plan of the community has been redesigned by leading London based architect Vladimir Tchaly and will be a ground-breaking development in Gwadar. They will invest $500 million across 10 million square feet in the city, making it the most important Port City in the world from both an economic and geostrategic perspective.

The Gwadar Port has a great geo-strategic importance as it provides China the shortest maritime access to Europe, Africa and the Middle East. China is the biggest importer of oil in the world and almost 80% of its energy sector imports pass through the Strait of Malacca but that region is vulnerable as it is frequently patrolled by the US Navy. Majority of Chinese imports and exports depend on the South China Sea but China is facing a number of maritime and land disputes with Taiwan, Vietnam, the Philippines, and the United States in the South China Sea.

In case of any hostility from state or non-state actors, energy imports and trade exports of China could be halted. China needs an alternate route to avoid any hostilities in the South China Sea and Gwadar Port through the CPEC offers this route. The sea route via Malacca is 12,000 kilometres long, while the distance of the Gwadar Port to Xinjiang is nearly 3,000 kilometres and from Xinjiang to China eastern cost is 3,500 kilometres so it would reduce the distance to almost half of the amount. 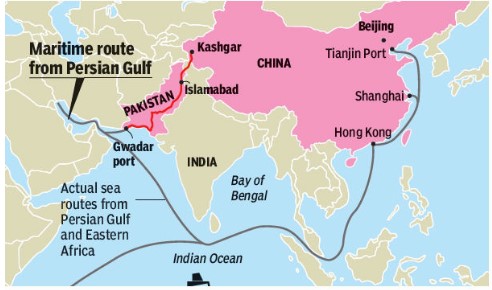 China has committed to invest $1.153 billion to finance construction projects and development of the port and adjacent sites. China has planned to construct $140 million East Bay Expressway project to connect Gwadar Port with the Makran Coastal Highway, installation of breakwaters at Gwadar port which cost $130 million, a $360 million coal power plant adjacent to Gwadar Port, a $27 million project to dredge berths in Gwadar harbour and a 300 bed hospital in Gwadar city that would cost $ 100 million.

Another desalination plant costing $114 million will be developed at the port to make sea water potable. China will further invest $35 million worth of infrastructure projects around the special economic zone. $230 million will be allocated to Pakistan to construct a new international airport in Gwadar. China Overseas Port Holdings Company also initiated $2 billion worth of additional infrastructure projects at the Gwadar Special Economic Zone.

Pakistan initiated trade of goods through Gwadar Port o 13th November 2016. CPEC is the biggest foreign direct investment, being roughly equal to the sum of all investments in Pakistan since 1970. The promotion of Gwadar in London will not help attract more investments to Pakistan but it would also promote a soft image of country amid accusations of Pakistan being a terrorist sponsor state. The country desperately needs foreign investments as the US has cut off its military and Pakistan will be placed in the Financial Action Task Force (FATF) grey list in June 2018.

Strategic experts believe that India and US want to isolate Pakistan in the international arena, India for its strategic interests over the Kashmir issue and US to force Pakistan to aid it in the Afghan war. This aggression would adversely affect the CPEC which is considered to be a lifeline for the country. The future of China also greatly depends on the success of CPEC since China needs an alternate route to the South China Sea.

US is increasing its military presence in the sea and supporting the claims of rival countries on the South China Sea islands. While China maybe an emerging super power, it still lacks the potential to meet these threats head-on and the Chinese government believes in resolving issues through trade diplomacy. Aggression against Pakistan and China by the US might be an effort to sabotage CPEC, an attempt to kill two birds with one stone. If more foreign investors are attracted to CPEC, it would provide more security to the project as the number of stakeholders will increase.