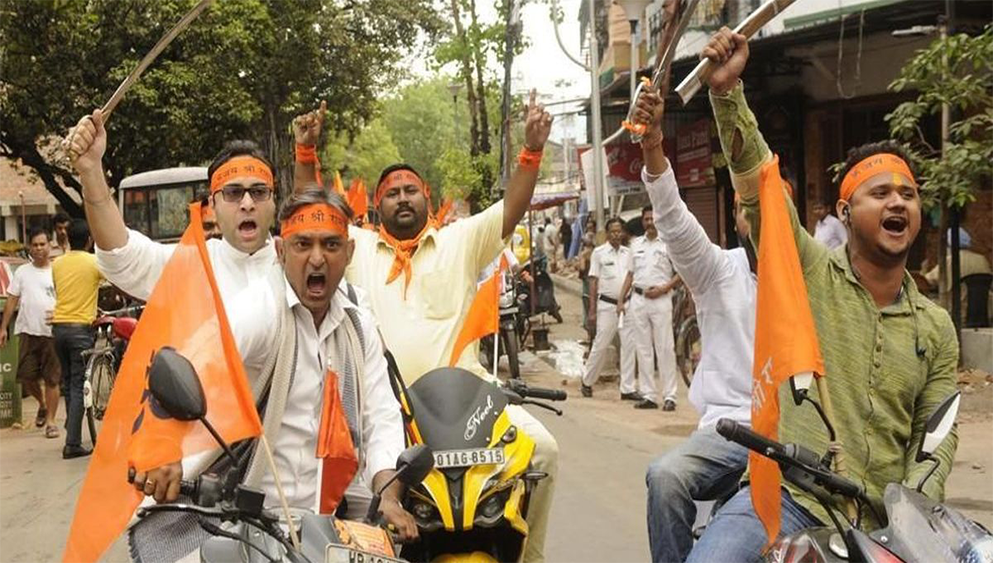 The recent listing of the Hindutva outfits known as Bajrang Dal and VHP by the Central Intelligence Agency as Religious Militant Groups has sent shockwaves across India. The Central Intelligence Agency, in its recent edition of the World Factbook has named the Vishva Hindu Parishad (VHP) and Bajrang Dal as â€œreligious militant organisations. The agency, the intelligence wing of the US government has categorised them under political pressure groups defined as organisations that are involved in politics or that exert political pressure but whose leaders do not stand for legislative election

The CIA also lists the RSS, Hurriyat Conference and Jamiat Ulema-e Hind among political pressure groups in India. The RSS has been defined as a nationalist organization, the Hurriyat Conference as a separatist group and the Jamiat Ulema-e Hind as a religious organization. The designation of the Bajrang Dal and VHP often called the Stormtroopers of Hindutva (or Hindu nationalism) have enraged right wing sentiments where these groups are seen as patriotic groups. It also has put the question of Hindutva in Indian society in the limelight.

The rise of the BJP in India riding on a wave of pro Hindutva sentiments was seen as troublesome by many. While the BJP has risen to power before, this time it was more worrisome due to the helm of power going to the controversial figure of Narendar Damordas Modi. While there was initial apprehension over the ascendancy of the political wing of the notorious Hindutva group the Rashtriya Swayamsevak Sangh (RSS), the concern was compounded by the premiership of a figure alleged to be the guiding force of the 2002 Anti Muslim Gujarat pogrom.

Many analysts saw the unfolding of a new global phenomenon known as Orderism to be behind the rise of Hindutva yet again. First presented by Jochen Bittner in his New York Times piece â€œThe New Ideology of the New Cold War, orderism is understood to be an authoritarian ideology based on the concept that liberal democracy and international law have failed and have created inequality and chaos instead.

Orderism prioritizes stability over neoliberal values, though it still largely prefers democracy as the mode of selecting a government. It is contended that orderism emphasis on local culture, economic security, local religion and populism helps it to be victorious in many liberal societies. While using public dissatisfaction with democracy as a stepping stone to gain traction among the masses, it also uses the visage of strong man to gain further popularity. This has been documented in the rise of charismatic figures around the world espousing orderist rhetoric like Vladimir Putin, Donald Trump, Rodrigo Duterte and Narendar Modi.

Narendar Modi's cult of personality can be a major cause of the rise on Hindutva. While the hardwork of the RSS in infiltrating Indian society greatly contributed to the BJP victory, it was the star power of Modi who is credited for teaching Indian Muslims their place which seemed to be a major force behind BJP victory. Also playing a major role was his tirade against corruption and unemployment which draws parallel with the latter campaign of US president Donald Trump.

The Orderist cult of Hindutva is not limited to Narendar Modi but also expanded to regional leaders. A case in point is the Chief Minister of Uttar Pradesh, Yogi Adityanath. Aside from being a BJP member, Adityanath is also the Mahant or head priest of the Gorakhnath Math a Hindu temple in Gorakhpur, a position he has held since the death of his spiritual "father" Mahant Avaidyanath in September 2014. He is also the founder of the Hindu Yuva Vahini, a youth militia that has been involved in communal violence. He is most well-known for his calls for taking Muslim women out of their grave and raping them.

Scholar Christophe Jaffrelot states that Yogi Adityanath belongs to a specific tradition of Hindutva politics in Uttar Pradesh that can be traced back to the Mahant Digvijay Nath, who led the capture of the Babri Masjid in Ayodhya for Hindus on 22 December 1949. It was the same Babri masjid which became the launch pad of the BJP's campaign to dominance in Indian politics.

The rise of Hindutva in the current time highlights that the ideology of orderism has also impacted Indian society. While initial incursions of Hindutva into Indian politics revolved around safeguarding the Hindu identity, the current triumph centers on other populist slogans as well. Public disaffection with the perceived corruption of the Indian National Congress as well as protecting the stature of India in the region and the globe are major reasons for continuing Hindutva victories. Such notions are staple pillars of Orderist movements worldwide.

In the end it can be concluded that political Hindutva is evolving with the new variant becoming a codependent on the new ideology of Orderism. Hindutva now employs the cult of personality in order to consolidate power throughout India. The nexus between Hinduva and Orderism is in turn a cause of concern for the Indian state as it could aggravate the multiple ethnic and religious faultlines of the nation. It is also a cause for concern for Pakistan as populist rhetoric is used to instigate anti Pakistan violence on the levels of both state actors and non-state actors.