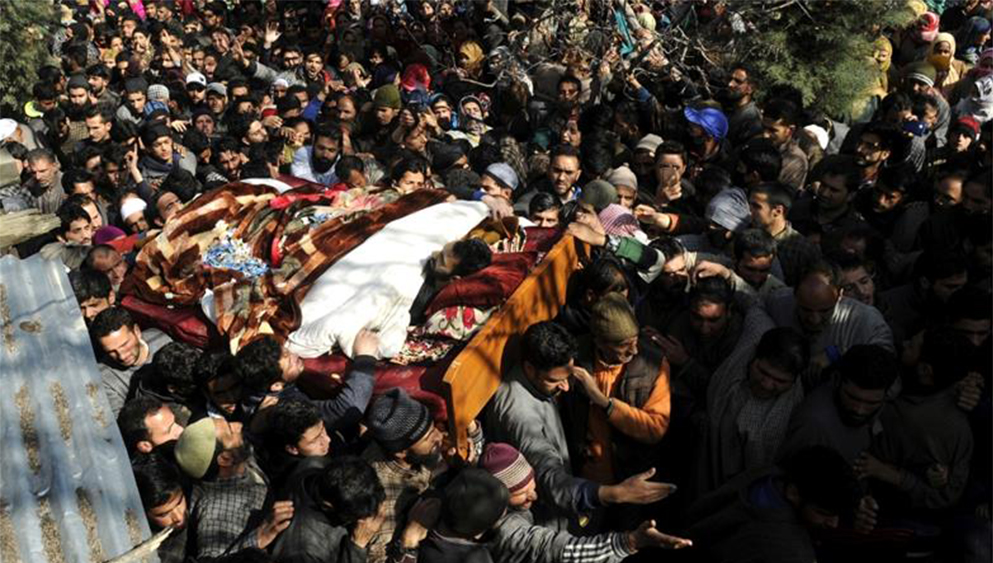 On a Sunday evening of 4th March, the Pahnoo village in Shopian in Indian-occupied Kashmir rang with bullets. For the residents of this mountainous area, the sounds are not unfamiliar as they have lived their lives under the occupying Indian government totalitarian rule. This incident was however the bloodiest incident of extra judicial killing in recent history as it left six young Kashmiri men dead. The incident is being touted as an act of defense by the Indian Army as they claim that the civilians who were slain were over-ground workers, a term used to signify people who support the rebels.

They also claimed that two of these men were rebels, working actively to create unrest in the region. Thus, a narrative has been created of state structure versus terrorism, which does not give a truthful picture of the situation in Indian-occupied Kashmir. It includes a large section of population unwilling to be administered by an occupying force.

This sentiment was evident in the fact that thousands of Kashmiris flooded the streets of Shopian, demanding justice for the residents who had been killed. Such display is not unprecedented as the Indian state had to deal with weeks of protests following the martyrdom of Burhan Wani - a young, charismatic Kashmiri independence activist.

The Indian military dealt with the recent protests violently, firing tear gas to disperse protestors and using aerial firing, though no one was reported injured. The simmering resentment for the Indian establishment is however indicative that there is much more to the story than a simple state vs. rebels narrative.

Separatist leader Mirwayiz Umar Farooq called the version of Indian army ‘Lies and propaganda’, a statement that echoes the real problem of the Kashmir issue and the obstacles that it faces every time the issue is raised on a public platform.

The Indian lobby is strong and uses the radical terrorism narrative to its advantage in a world that is already weary of religious extremism. This successful propaganda pushes back the cause of the Kashmiri people and it goes along being ignored on international forums.

In this particular instance, keeping the strength of the Indian state in mind, this issue can be solved by diverting it to a socio-economic paradigm. The Kashmiri diaspora should fund the resistance and lobby it worldwide through advertisement. A similar tactic was used by the Indian side where Free Balochistan billboards were spotted in England.

This propaganda game needs a steady inflow of capital and thus the Kashmiri diaspora needs to pitch in. The social aspect can be further focused on through social media campaigns and through opinion leaders focusing on the Kashmir issue and not letting the other side of the story be silenced. Thus, while the issue of Kashmir is very much a political one, it needs socio-economic support to perpetuate and create a counter narrative.

This era of warfare is widely held as being psychological in nature, thus rather than militant efforts that lead in collateral damage, there needs to be a counter movement on the socio-economic fronts lead by the people of Kashmir themselves. This will lead to the building of a concrete structural resistance, one that is vital to counter the Indian narrative.