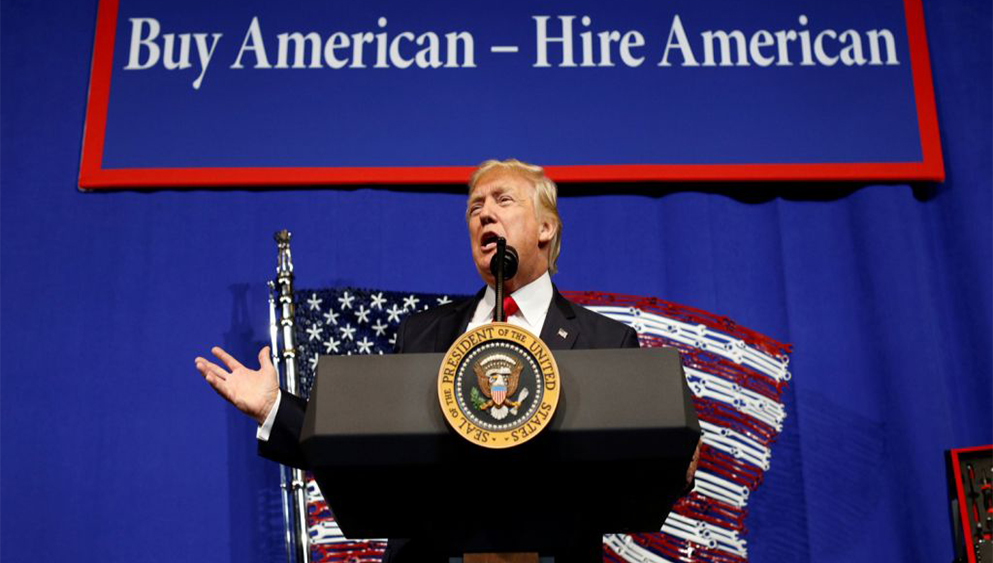 “We are on the losing side of almost all trade deals. Our friends and enemies have taken advantage of the U.S. for many years. Our Steel and Aluminum industries are dead. Sorry, it’s time for a change! MAKE AMERICA GREAT AGAIN!”

As seen in the content of his tweet and his prevalent policies since his election as president of United States of America, Donald Trump is upping his protectionist policies and urging the American trading partners to impose higher tariffs on metals. European Union and Canada the largest suppliers of metals i.e. Aluminum and steel to the United States of America also rejected the demands of Donald Trump. Moreover, Beijing policymakers responded that they will counter the impact of such policies and will defend their interests. Donald Trump has revealed that 25 percent tariff will be imposed on imports of steel and 10 percent on the import of aluminum. It is pertinent to mention that these tariffs have similarity to the proposal been put by the US administration before the invasion of Iraq in 2002.

The fact of the matter is that European Union is the traditional trade partner of the United States of America. According to the statistical data of World Trade Organization (WTO), the trade correspondence between the traditional partners is almost 14 percent of the US Gross Domestic Product (GDP) and 17 percent of European Union GDP. The U.S. represents 9% and 14%, respectively, in total global exports and imports, while the relevant proportions for the EU are 15% and 14%, respectively. The volume of steel imported by the U.S is 35 million tones whereas Canada is supplying 16 percent of the total volume. Moreover, Brazil is supplying 12 percent and South Korea is providing around 10 percent of steel. It is for the first time in the past decades where major trading partners, such as the U.S. and the EU, consider direct retaliation moves to each other’s barriers to trade.

There are plausible contingencies that the move from POTUS will eventually increase the cost of steel domestically and "trigger a tariff war". For instance, this move can be responded by China and India as they may raise tariffs on any number of imported U.S. goods. Moreover the discourse behind “Make America Great Again” is creating job opportunities for the Americans, saving the industries of the US and dropping the burden sharing of the US. Nonetheless, such moves, will not necessarily lead to the creation of more jobs as the Trump administration is arguing. Interestingly, the last time import tariffs were imposed on steel from the US affected the Washington economy in a negative way. Trump’s expectation for a surge of foreign capital directly contradicts his dream of decreasing the US trade deficit. This muddled agenda betrays the Trump administration’s scheme because other countries will go with a tit-for-tat approach which means that local industries and consumers will suffer. The local people of counties involved in this high tariff fiasco will have to pay higher prices for intermediate and final goods.

Overall the metal scheme presented by POTUS is an episode of long-term protectionist policies of Trump Administration. In initial days of his presidency he abandoned the Trans-Pacific Partnership TPP, moreover, his readjustment policies towards and the North American Free Trade Agreement NAFTA put the alarming bells for a big trade war.

Interestingly the US is not going against the essence of liberal world order and free trade for the first time. History revealed that the US was never a truly free trade state. Those who think that the US is open for free trade are living in a paradox myth. In past, both Democrats and Republican governments have followed the protectionist and neo-mercantilist approaches in spite of their general rhetoric. The “military-industrial complex” is the biggest example to prove the above-mentioned hypothesis. The fundamental essence of free trade allows the trade of all other countries with “Military-Industrial Complex” but they are not allowed to trade with US administration. Notwithstanding these approaches are essential for forging the fabric of American democratic model. Military-Industrial Complex is merely one example, the US state apparatus always secures the domestic industries and workers from the impact of globalization and free trade. In a holistic approach, Republicans are known as pro-free traders, whereas Democrats are labelled as an economic nationalist, but on a bigger picture, both of them have same motives to secure the domestic economic arena from the wave of free trade. Expanding the thesis with the help of chronology, in the Republican era, President Ronald Reagan encouraged significant barriers to trade. He forced Japan to put the limit on the number of automobiles it exported to the United States whereas George Junior Bush imposed high tariffs on steel. On contrary in the Democrats era, Barrack Obama went with protectionist policies of energy independence, tax penalties for companies that move jobs overseas, tax subsidies for companies doing domestic manufacturing, and aggressively pursuing trade cases against China. In the end, back in the presidential campaign of 2016, both contenders Hillary Clinton and Donald J. Trump discussed their trade policies for the United States of America. With minute differences they questioned the role of the United States of America in the multilateral trade agreements and burden sharing. Their culminating point was the domestic industries and workers.

Overall the United States of America is the biggest supporter of free trade and liberal world order but in reality, it has camouflaged its industries and workers in order to protect them from a wave of globalization.

The current president Donald Trump’s policies are though portraying a very aggressive protectionist agenda, even when measured against the most protectionist Democratic administrations. If the US administration will continue with these lethal protectionist policies and neo-mercantilist approaches, we can quickly see this dispute escalating and a trade war could easily push an already fragile, global economy into recession. The world already has various trans-national and trans-regional threats looming around. At the moment the world does not have a tendency to absorb recession globally but these trade wars are putting the globe on that verge.