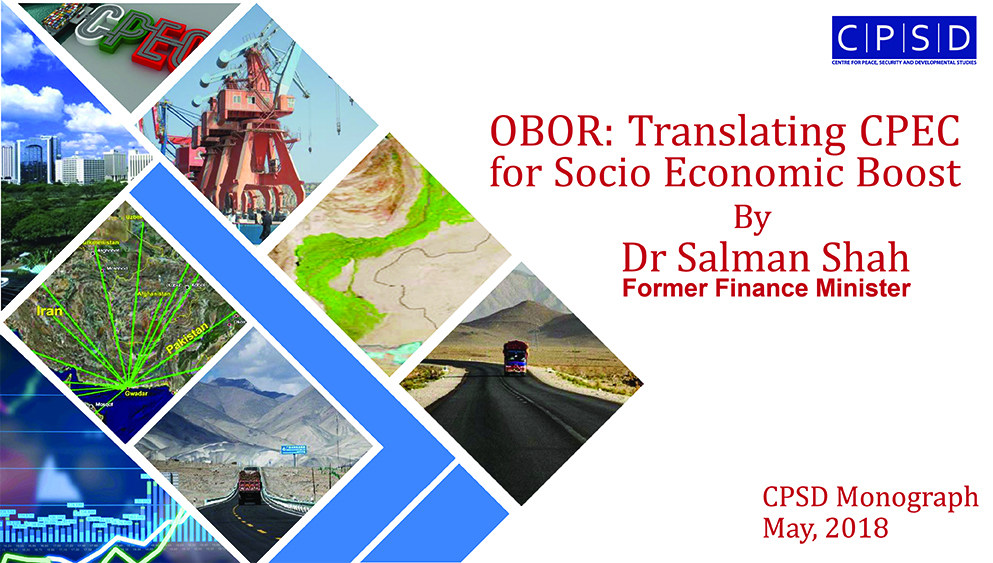 
Pakistan is the sixth largest country in the world with a population of 210 million– with 120 million under the age of 25. Its strategic position with access to the western Indian Ocean makes it truly the heart of Asia linking China, central Asia, west Asia, south Asia and the Middle-east. It is also rich in natural resources and minerals and its geographical resources include large alluvial plains with an underdeveloped and “sub-optimally” used Indus river system. To continue its trend of positive attributes, it also has a major market with an inward looking $ 300 billion market economy. However, it is growing at an anemic growth rate of around 4 percent.

Poor governance and corruption are Pakistan’s Achilles heel and therefore, the country lacks investment capital and has poor human development indicators. Thus, there is a need for an inward movement to translate Pakistan’s resources into socio-economic change rather than letting them go to waste.

Pakistan’s youth bulge is projected to continue for next thirty years in spite of declining fertility.

The country has a population of 207.7 million growing at 2.4% per annum, which is the sixth largest in the world.

This growing population should be looked at positively and Pakistan should work towards making it into a strength rather than falling into a supply and demand problem because of the growing population. Compared to aging societies, Pakistan needs to continuously create jobs and opportunities for new workforce entering every year. This is only possible if Pakistan transforms its economy into an outward looking competitive economy. Pakistan can get huge productivity gains by imparting skills to under 35 years population (70% of total population).

A fast-growing economy usually requires a growing Working-Age Population (WAP). WAP of Europe, the US and Japan experienced healthy growth between 1960 and 1990. After 1990, it started to decline in Japan and to stagnate in Europe but it continued to grow in the United States.WAP of the BRIC countries experienced strong growth until 2015, but it will be flat from now on. Only India’s WAP will continue to grow. Brazil’s will be flat while China’s and Russia’s fall sharply.

The vast bulk of WAP will come from sub-Saharan Africa, India and a few other Asian countries including Pakistan. The question now is whether Pakistan can translate its own booming WAP into rapid and sustainable economic growth. With developed and BRIC countries economic growth slowing down – Pakistan has a great opportunity to benefit from these demographic trends.

If this participation rate follows South East Asia (SEA) trajectory then nearly 4.24 million jobs will be required to be created every year. The central objective for public policy should be economic growth with job creation; driven by entrepreneurship and skills development. This means pro-jobs growth is promoted. This is an ideal time for Pakistan to capture 85 million jobs from China & SEA.

The China Pakistan Economic Corridor is being hailed as an economic game changer by the Government of Pakistan. The project firmly embeds Pakistan in the Chinese strategic “One Belt One Road” initiative.

The link will provide China with a direct access to western Indian Ocean, while it provides opportunity for Pakistan to become a logistics hub for South Asia, Central Asia, Western Asia, Middle-East and Western China. Whether it becomes a game changer for Pakistan will depend on the extent Pakistan can use CPEC as a stepping stone for boosting its global competitiveness. This will depend on the extent of future Pakistan-China economic integration and the commitment of both the governments of Pakistan and China towards that end.

With the world’s largest population that is increasingly becoming rich, China is switching from an investment driven growth strategy to a consumption driven growth strategy with major opportunities for neighboring Pakistan. China can be a big source of investment capital, technology and knowhow for developing Pakistan's economic potential, generating growth of 8 to 10 % per annum, boosting exports and generating economic prosperity over the next 30 years. This would require pursuing a national agenda for benefiting from economic integration with China with the aim of rapid development of Pakistan. This will enable Pakistan to sustain its national security with an underpinning of a strong economic base in face of a resurgent and aggressive India.

Pakistan should take full economic advantage of CPEC for its own gain but for that to happen, there needs to be a concise policy framework in place. Accelerating productivity growth should be front and center on the policymakers’ agenda to ensure continued and sustained progress on job creation, growth, poverty reduction, and shared prosperity. Movement of resources from agriculture to higher‐productivity agro business, manufacturing and services should be prioritized in order to move Pakistan to a higher economic status. The movement of labor from subsistence agriculture to industry and services will also substantially reduce the large differences in productivity across sectors. Important mechanism for productivity growth operates within sectors through movement of resources from less productive to more productive firms.

Pakistan should develop strategies for expansion, modernization and transformation of the wealth creating production sectors: (manufacturing, mining and agriculture). This will increase productivity and competitiveness through technology improvements will reduce costs in the following production sectors: agriculture, engineering, electronics, consumer goods and value added textile industry. The expansion of the services sector, which includes the new economy (domestic markets, IT, Design, Knowledge economy, Finance, Accounting) is highly important to be on par with other global economies. Boosting and modernizing infrastructure and the construction and contracting industry, (job creating segment) is also important as well as fully developing the water and power potential of Pakistan.