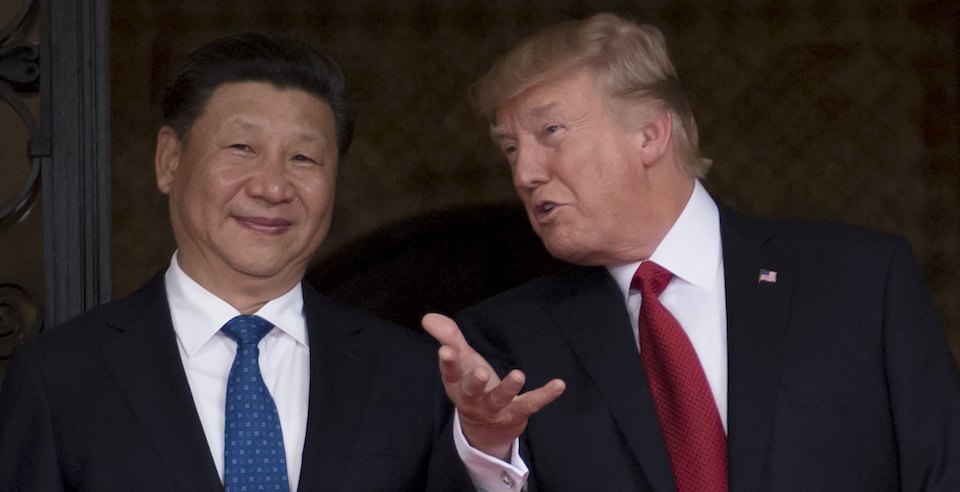 Donald Trump recently wrapped up a transcontinental tour of the world’s largest continent. Having completed the tour and returning safely to the US, he has proclaimed his 12-day visit a ‘gigantic achievement,’ guaranteeing that ‘America is back’ as a worldwide pioneer, in both diplomatic and political aspects. The US President did not take inquiries from journalists, rather conveyed an expanded record of his five-country trip, in which he guaranteed to have bound together the world against the North Korean nuclear weapons program. Advocating for a free and open Indo-Pacific, and demanding free and equal exchange relations with the Pacific Rim.

While President Trump came up with an elaborate description of the real purpose and intention behind his Asian visit, Pyongyang already labelled it as a warmongering trip to tussle with other nations in this rhetoric. The trip offered an insight into how the Trump regime wished to approach the region which contains not only some of America’s staunchest allies but, also its most nefarious adversary. In recent times, Trump has followed a policy of ruthlessness and perhaps attacked North Korea and its leader while boosting his allies in the region to do more on their own ends as well.

The meeting of Trump and his Chinese counterpart Xi Jinping, yielded no new developments. It seems the US remains adamant in its opposition to the policy of pursuing a similar course of action as it did with Iran.

No repeat of Iraq can occur. Especially since Trump has repeatedly, both as President and nominee, attacked the Iran deal and his rhetoric growing venomous in regard to North Korea with each passing day. Beijing still hopes a deal will be put on the table for North Korea which will inevitably be too good to refuse for the Kim regime. Surprisingly, China has acted along with the US and its other allies in putting as much pressure as possible on North Korea in order to isolate it diplomatically and inevitably leading to its collapse. China has played along, but when it comes to any decisive blows, it has iterated on numerous occasions, it will not act directly to enact any overthrow of the North Korean regime.

The President additionally claimed to have won approval from China and different nations in the region to apply extreme pressure on North Korea. However, Chinese authorities have focused on Beijing, willing do nothing to trigger any sort of friction with Pyongyang. China has its own stake in the continuation of the current North Korean junta, as it allows it to have a major diplomatic card in the contest of global politics.

If the North Korean regime was to crumble, the US would gain a significant entry into China’s backyard, creating a security risk for the Asian giant who even as of right now remains vigilant of South Korean, American and Japanese activity in the region.

He depicted the Asia visit as being dedicated to renegotiating exchange bargains in the support of the US. Getting territorial partners like Japan and South Korea to pay more for the US military nearness and the security it gives. Trump guaranteed he had influenced Japanese and Korean organizations to increase employments. He stated that the US and South Korea would soon begin talks on exchange programs, and also claimed that South Korea and Japan were eager to purchase billions of dollars in US military equipment. Conspicuously, Trump seemed to offer the South Korean leadership significantly little attention compared to Japan or China, who he believes are the real counterweights to North Korea’s growing nuclear capabilities.

Trump's manifesto of “America First” would require it to severely curtail its say in foreign affairs of other regions. That is the line his entire campaign took and that is what effectively got him into office.

But, forsaking America’s military and diplomatic power in this Indo-Pacific region would mean a vacuum, and China is more than capable to fill that void. His trip to Asia was to reaffirm US presence in the region and his meetings proved successful in conveying Washington’s power politics. However, it will also require continued presence and participation of US machinery, both militarily and politically, something which overtly contradicts Trump’s “America First” manifesto.

The Asian tour allows for an insightful look at the Trump presidency as a whole. Popular abroad, severely disliked and unpopular domestically while suffering the lowest approval ratings not seen since Nixon’s Watergate scandal. The Russian probe appears as a termite, ebbing away at the administration with each passing day while Trump’s actions on the Russian issue do little to discard the conspiracy theorists. And yet, this straightforward attitude of Trump is welcomed abroad. Many saw Donald Trump inside Saudi Arabia on his first official foreign tour where he was showered in praises and was subjected to a royal treatment. It paid off. In the eyes of many observers, Trump gave Saudi Arabia everything it asked for and so it made sense for the South East Asian hosts to take note, and put forward a similar, though more traditional and customized-for-Trump welcome.

Trump’s Tokyo excursion began when Japanese Premier Shinzo Abe laid down the traditional “diplomacy through flattery” approach for him. A man known to enjoy his vices, his favorite meals and dishes were prepared. A perfect occasion to get the 4th president in the brightest of moods, while pitching him Japanese insight which would otherwise be met with a cold rejection or a simple ignorance. A bond of friendship was formed which the Japanese premier iterated had not been present among any other US-Japanese leaders. Diplomacy aside, Japan has gotten on Trump’s good side, the fruits and repercussions of which will surely be reflected in future policy making in Washington.

While Abe, a conservative in his own right, who visited Trump before the President was even authoritatively initiated, has dependably been a simple relationship, ties with South Korean President Moon Jae-in have been more stressed.

Trump has freely reprimanded Moon, and the absence of an individual connection between the two pioneers has come about on occasion in South Korea clearly being neglected in choices on North Korea policy - prompting worries in Washington of a developing crack with Seoul.

Trump probably began his tour with a clear objective with regards to China. As presidential candidate, he presented an image of himself as the modern day Messiah who would endeavor to end Chinese monopoly within the US companies in the form of offshoring and would enact protectionist laws to safeguard American workers and jobs from Chinese manipulation and a step further, demonized China for “assaulting” the US. President Trump however, has a 180 degree change on that tone. Chinese President Xi was referred to as a “king” by Trump for his governance and the way he has envisioned China’s future. Xi has reciprocated that favor. As CCTV, the Chinese state television stated, Trump gave China what it wanted, mutual respect. Perhaps a viable case study into Trump’s lack of experience as a statesman, but an increased amount of activity in this region would not be welcomed by the other 6 partner countries namely, China, Vietnam, the Philippines, Malaysia, Taiwan and Indonesia. All of which have probably gotten the hint, US wants to minimize its involvement in the region and expects them to raise theirs. The problem is, no one wants to.

The Japanese approach to Trump has been head and shoulders above the rest according to International Institute for International Studies’ Choong. The policy of cajolery to a man who’s notorious for straying away from critical matters in favor of more individualistic and personal triumphs, would somewhat ensure Japanese getting what they want from him. Although President Trump is a much more harmonized figure than Republican presidential candidate Trump, where he has had to mince his words, there have been instances where the cat has been let out of the bag. China for instance, was supposedly the subject of a diplomatic dig when Trump implied, though subtlety, that the US had in fact been taken advantage of and while the US continues to hold up its end of the bargain, the same is not true for its other partners.

Trump set out with an interesting set of goals when he embarked on this trip. The countries and the leaders he was supposed to encounter allowed him to delve deeper into the foreign policy issues that have marred his administration of late.

His official photograph with his Vietnamese counterpart generated a mood of irony as the looming figure of Ho Chi Minh, the pioneer of Vietnamese resistance to US forces in the Vietnam war foreshadowed in the background, adding to the irony of how desperate the US has really become.

That was till 1st January, 2018 when Trump got back to his old habit of negating the mainstream media in favor of tweeting, hence speaking directly to the American people. While it won’t be possible to list down his entire tweet, the essence of it was that while the US had continued to provide Pakistan with nearly $33 billion aid, it had only received lies and ungratefulness from Islamabad. This follows a pattern of Trump growing increasingly close to Pakistan’s arch nemesis India over his short reign as President, while continuing to hurl Pakistan with verbal jibes. The impact of this single tweet was felt almost instantaneously as the country’s ISPR responded in clear terms that Pakistan has not only been at the forefront of the US’s war, it has paid the price with both blood and economic catastrophe.

An even bigger reaction was when the country’s State Bank announced that its dealings with China in apropos of CPEC will be in the Yuan and not the dollar. Perhaps this signaled that an apparent split between the two frosty allies was around the corner.

In recent years, especially in the last decade, Islamabad has grown close to Beijing while appearing to favor a policy of distancing itself way from the US. Though it has resulted in the US favoring India in diplomatic and political terms, China’s relationship with Pakistan has allowed it to rapidly expand on the CPEC arm of its “One Belt One Road” initiative. This might be the moment in history when the US finds itself without an ally in the region. At a critical moment when the US seems in a rush to end its military presence in the country, such a breakdown of relations between the two would spell catastrophe for the US, as Pakistan already seems to have embarked on its contingency plan in case of US relations souring.

Perhaps the most interesting facet of his trip was reserved for China, where he made all his possible attempts to woo President Xi, comparing him to a king as previously stated. The cajolery is meant to garner support for his policy with regards to North Korea in an effort to dissuade China from supporting the isolated North Korean regime. The eventual success or failure will be easier to evaluate in the upcoming months, judging from how these countries respond to the President’s visit. For years it has been decried that the US may be a decaying power, and with Trump’s alleged preference to focus more on domestic reform rather than acting as a global police has fanned the flames. This visit however, was meant to reaffirm America’s leader of the world persona. Will it do America any good? Only time will tell.