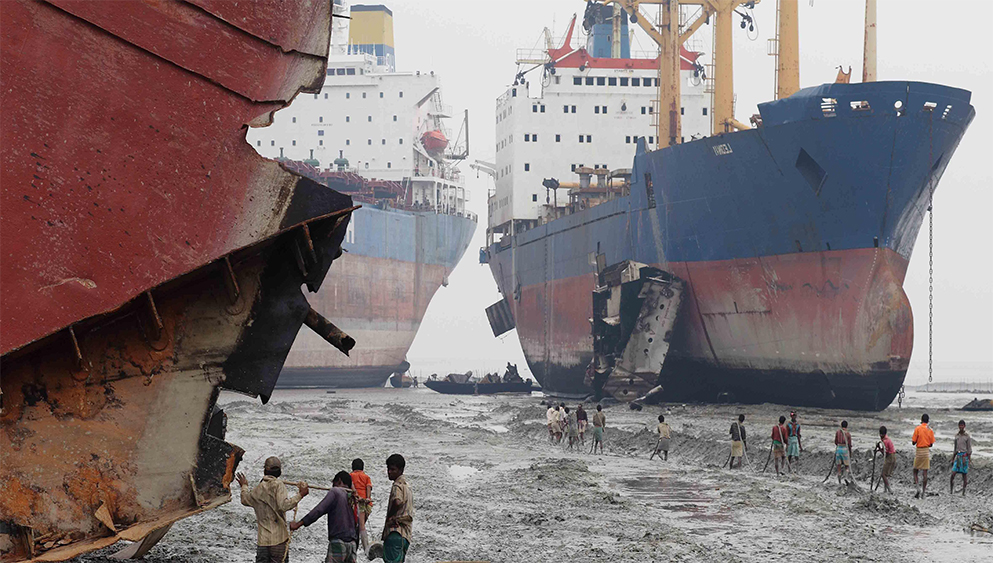 The Dark Side of the Ship breaking Industry

It is assumed with the evolution of international human rights norms that human beings have become more civilized and slavery has ceased to exist. However, how true is this narrative in the case of fundamental rights provided to unfortunate, downtrodden and destitute ship breakers who earn less than £4 a day. Their labour contributes billions to the economies of their states but their work is unfortunately unknown.

Shipbreaking is a highly lucrative business but the labourers suffer considerably due to low wages and poor working conditions. It is due to the fact that human rights norms have failed to have an immense impact on the powerful state. Even in today’s civilized world, the success of international conventions depends heavily on the support of sovereign states. Despite ratifying the International Covenant on Civil and Political Rights (ICCPR), major ship recycling states i.e. India, Pakistan and Bangladesh ignore the obligation to protect the right to life. According to Article 6, “Every human being has the inherent right to life. This right shall be protected by law. No one shall be arbitrarily deprived of his life.”Responsibility rests with the states to adopt positive measures under this provision to protect vulnerable individuals.

Another fundamental right i.e. the right to health which is laid down in the International Covenant on Economic, Social and Cultural Rights (ICESCR) is equally ignored by these states. As Article 12 states, “Everyone has the right to the enjoyment of the highest attainable standard of physical and mental health.” This article is not just confined to health care rather embraces a wide range of socio-economic factors that promote conditions in which people can lead a healthy life. Ironically this covenant is also ratified by all these three major ship recycling states.

Kenneth Waltz for example argues- that ‘states join human rights treaties because they are induced into doing so by more powerful nations—those that receive the largest inducements will be those most likely to join.’ It seems accurate in case of the South Asian states because it is not their genuine commitment to the ideas these human rights treaties embody

Every year, these states lose hundreds of ship breakers and they know that these deaths are preventable. But their lives hardly matter for the states. Ship breakers are killed or maimed due to unsafe methods and procedures utilized to break end-of-life ships on tidal beaches. Sadly, recycling states remain numb to the crises- because shipbreaking is a matter of higher profits and lowest costs.

Breaking ships has never been considered an easy task; it has always been considered a high-risk job. The work is extremely dangerous and deaths often occur in addition to the chronic acute health issues encountered by the laborers. Workers are often exposed to deadly toxins, falling steel plates and exploding gases. On November 1, 2016 a fire broke out on a ship which was being dismantled at Gadani which claimed 28 lives. One of the reasons of the blast was that the workers were forced to start the dismantling process even before the fuel tank could be cleaned of the remaining highly inflammable oil and its fumes. Unfortunately, even after such incidents, no efforts are made either by the state or yard owners to improve the method of dismantling.

A very common phenomenon is that workers are not even provided with Personal Protective Equipment (PPE) i.e. helmets, safety shoes or goggles which are essential for such dangerous work place. Moreover, workers are not provided respiratory protection for protection from the toxic fumes and dusts. They are not provided climbing gears while many in Bangladesh go barefoot. Poor workers are unable to demand better conditions out of fear of losing their only source of income. The lack of safety standards jeopardizes workers’ lives.

Around 98% of the workforce in shipbreaking yards is illiterate, therefore, a contractor doesn’t consider it important to have a formal contract between employer and employee. In case of any incident, there is no appropriate way of tracking a worker’s identification as neither are they issued IDs or employment letters, it is very difficult to confirm if somebody really works in the shipbreaking yard.

As far as wages are concerned, they depend on the type of work or skill level. Shockingly, they have no entitlement to overtime, sick or annual leave. Neither do they receive any medical facilities from the ship yard owners.

Another drawback of shipbreaking is that- beaches are not directly accessible to firefighters or medical teams in the event of an accident. Between the lack of basic safety precautions, training, and emergency response equipment, countless casualties occur every year— many going unreported. Disabled or injured workers do not receive any support to find a new source of livelihood, and their families are often cast back into crippling poverty. Even if workers survive physically unharmed, they often suffer from fatal occupational diseases like asbestosis or cancer due to regularly being exposed to toxins.

According to a 2010 World Bank Report on the shipbreaking and recycling industry, “Although the industry is beneficial from a life-cycle assessment point of view, over the years it has gravitated toward countries with low labor costs, weak regulations on occupational safety, and limited environmental enforcement. The “global shift” in the industry to countries with comparatively weaker regulatory systems is of particular concern as ships contain many hazards that can have significant detrimental effects on humans and the environment if not dealt with properly.”

The aim of callous ship owners is to get rid of their obsolete ships in a profitable manner. They maximize their profits by selling it to a broker who in turn sells it to substandard shipbreaking yards in countries such as India, Bangladesh and Pakistan. If they choose clean and safe recycling of ships it means greater costs. The modern ship recycling facilities of Europe and North America not only enforce health and safety provisions but also strict environmental rules which are quite expensive. Thus, very few ship owners deliberately choose to sell to modern ship recycling yards where they have to pay more and bear greater responsibility in the recycling process which is waived in case of South Asian states.

These retired vessels are broken by hand on the shores of South Asia. Majority of ships in the world’s large ocean-going commercial fleet have been dismantled on beaches of Bangladesh (Chittagong), India (Alang) and Pakistan (Gadani). Shipbreaking in South Asian countries is subject to less control and scrutiny and labor laws may not be enforced or cover these activities. Work place safety has remained a low priority across South Asian states.

India, Pakistan and Bangladesh specifically have become the ideal dumping ground for most ship owners seeking to make the highest possible profits. According to NGO Shipbreaking Platform in 2017, 543 ocean going commercial vessels were broken down by hand in Bangladesh, India and Pakistan.

The most common method of dismantling ships is known as beaching, which involves deliberately breaking the ship onto the beach so that it can be dismantled during low tide. This method not just poses risk to human health and safety; it poses risk to the environment as well. This process is outlawed in the European Union (EU) and other developed nations.

Ships contain thousands of tons of hazardous materials, such as lead, asbestos, polychlorinated biphenyls (PCBs), plastic waste, oil residues, and heavy metals. These hazardous materials pose a danger to the workers and to the surrounding ecosystems and communities. In South Asia, shipbreaking occurs primarily in the intertidal zone of beaches and mudflats— here, there is no possibility for proper waste containment, disposal, or sediment dredging. In fact, it is standard practice in shipbreaking countries to either resell the large amounts of hazardous waste from obsolete vessels in local markets or dump it in unmarked areas.

Shipbreaking has increasingly established itself as a cause for great environmental concern. The shipbreaking industry degrades both coastal and marine ecosystems. Millions of tons of hazardous waste have already been imported to South Asian countries because of the shipbreaking industry. Chemical pollutants, toxic leakages, debris and paint chips from end-of-life ships are absorbed by coastal sediments or else washed away by the tides. In addition to inflicting devastation to the health of local ecosystems, communities and economies – this pollution poses a major threat to the greater ocean systems.

Due to unacceptable working conditions of the workers and causing constant damage to the local marine environment, ship recycling industry is often criticized - To address these concerns, conventions such as, Basel Convention on the Control of Trans-boundary Movements of Hazardous Wastes and their Disposal, International Maritime Organization (IMO) guidelines on ship recycling exist but are considered inadequate to address the issues of human safety and environment.

Therefore, in May 2009, the International Maritime Organization (IMO) adopted the Hong Kong International Convention for the Safe and Environmentally Sound Recycling of Ships to address the growing concerns about the environmental , occupational health and safety risks related to ship recycling. Yet it has not entered into force. The treaty’s approach is comprehensive as it includes ship recycling yards, human safety and environmental protection but some major drawbacks discussed below raise question whether it will be able to achieve more than the procedural objectives.

Shipbreaking is modern slavery. It can only be abolished if recycling states intend to do so otherwise laborers of South Asian states will continue to be exploited in the future. South Asian states have failed to adhere to international human rights law. HKC can be considered as a step towards right direction but mission related to environmental, occupational health and safety risks related to ship recycling remains unaccomplished. Environmental groups, in general, view it as a weak and inadequate response to the problem of such a great stature and one of the groups has even called it as “legal shipwreck.” The time has come to adopt coherent convention or to amend the existing laws to make it clear that safety must include credible, effective law enforcement efforts. An endeavor of potent magnitude is required for a seismic shift in our safety culture.